When govt refuses to bend, people take law in their hands: Cong 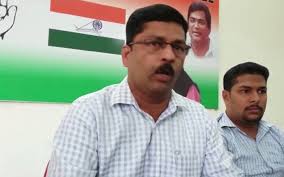 Goemkarponn desk
PANAJI: The Goa Pradesh Congress Committee has said that the arrogant BJP Government in Goa has always tried to supress the voice of the people to push forward its anti-people policies.
GPCC General Secretary Amarnath Panjikar in a statement here said that the Transport Minister Mauvin Godinho should not instigate the people of Goa to agitate on issues of steep hike in penalties under new Motor Vehicle Act.
“When the Government refuses to Bend, the people take the Law in their hands,” he stated.
Congress Party demanded that the Government must have a sympathetic view about Goan Taxi Operators. It is the duty of the Transport Minister to be humble and find solution to the issues concerning the local taxi operators.
“Arrogance and dictatorial style of functioning does not work in resolving issues,” said Amarnath Panjikar.
He said the Transport Minister Mauvin Godinho must dare to question the contractors of National Highway and New Zuari as well as the third Mandovi Bridge M/s MVR Construction Company and M/s Dilip Buildcon Limited who are responsible for endangering the lives of the people.
“Why the Transport Minister is silent on the mess at National Highway work from Patradevi to Porvorim and at Cortalim-Agassaim roads?”questioned Amarnath Panjikar.
He said it is the same Transport Minister who had announced that the amended Motor Vehicle Act will be implemented in Goa only after repair of Roads and creating proper infrastructure for the commuters.
“We demand that Mauvin Godinho must place before the people of Goa what action the Government took to repair the pathetic road conditions in Goa. The roads all across the State are in the same worst conditions as they were a year back,” charged Amarnath Panjikar.
He says that Congress once again warns the BJP Government not to implement the amended Motor Vehicle Act in the State till all roads in Goa are repaired.
“We also demand that the transport department must adopt people friendly approach and weed out all the agents and middlemen’s from the transport department offices,” he said.