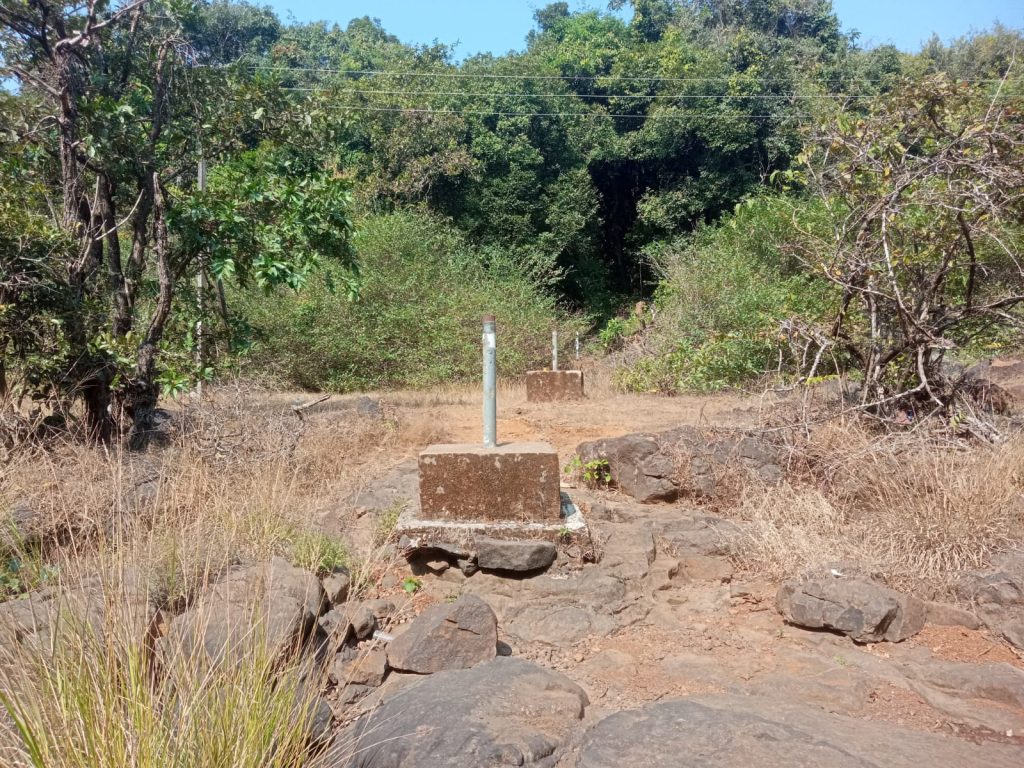 — Soil testing carried out by Karnataka at the proposed Kalasa project site in Kankumbi.
— Site already demarcated for dam construction
— Demarcation and erection of poles for the construction of a controversial dam in the reserve forest at Kankumbi.
— Tributary of Mhadei completely dried at its source due to the forceful reverse flow mechanism employed by Karnataka to change its natural course.
— Diversion of water via an underground canal has impacted the confluence of Kalsa and Parwad nullah that merge to form a single water channel and meets Mhadei at Uste in Sattari.
— The controversial project has already affected the flow of water to Goa, with th

e Barzan waterfall seeing a drastic reduction in its water level.
— Concrete pole showing the International boundary of old India and the current boundary of two States, Goa and Karnataka in the reserve forest. The area at its right indicated Portuguese India, while the area at its left used to indicate British India in the old era.
— Impact of underground canal construction and water diversion on Mhadei basin

Goemkarponn desk
KANKUMBI/ SATTARI: The goa-Karnataka dispute over the Diversion of Mhadei water may not be new, but it is becoming a topic of major concern with each passing day due to certain obvious reasons. Goa claims that Mhadei is water deficient and Karnataka’s move to divert the water from its natural course will severely impact the irrigation activity as well as the fragile ecosystem of the State.
On the other hand, Karnataka claims to be diverting the surplus water from the Mhadei basin.
Goemkarponn spoke to the people of Kankumbi, a village in the Belgavi district of Karnataka, which is also the proposed Site for dam construction.

Raghunath Dalvi, President of Mauli temple, Kankumbi, said they are facing a lot of difficulties due to the construction of the underground canal, which according to him, passes beneath the Mauli temple.
“Construction of canals to transport water has resulted in the development of cracks on walls of the temple and houses of Kankumbi village. The proposed water diversion project is serving no good to us. Channelizing water against its natural flow will not solve the water crisis. Won’t today’s deficiency of water turns out to be a surplus tomorrow? Won’t it lead to flooding of Malaprabha during monsoon?” asked Dalvi.
Goemkarponn also visited the proposed project site at Kankumbi to give a clear picture of the disputable Site to our readers.

Images captured in and around the vicinity of the controversial Kalsa project exposed Karnataka’s ongoing work of diverting the water against its natural course into its Malaprabha basin.
Environmentalist Rajendra Kerkar briefly explained the technicalities pertaining to the controversial Kalsa Bhandara project.
Kerkar said, “Karnataka has proposed to build a 10.5-metre height dam in the reserve forest of Karnataka at Kankumbi at a distance of hardly 300 metres from Mhadei Wildlife Sanctuary. The reservoir so constructed at this Site will trap the water flowing through various streams and block its natural flow to the Mhadei basin. The stored water will be transported respectively through 3.5 and 9.5 km long pipelines