While Policemen were on Election Duty, Burglars broke open a Jewellery Shop 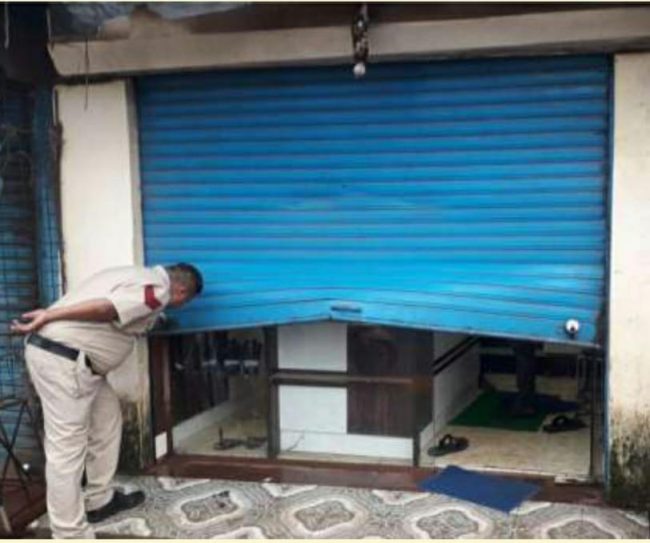 Goemkarponn desk
CANACONA – Taking advantage of the delegation of police personnel for Panchayat elections, unknown burglars breaks-open a Jewellery shop situated in the busy Chaudi market late Tuesday night.
Burglars, however, could find and take away the heist consisting only of a few valuables worth around 1 lakh of rupees, including Silver and just 1 gram of gold from the shop.
The burglars bent the shutters apparently with a strong iron rod to broke-open and gain entry into the shop somewhere between the midnight/intervening nights of Tuesday – Wednesday.
According to goldsmith Sanjay Vernekar, he was hardly keeping gold or gold ornaments or other costly items in the shop overnight and usually meeting with the consumers’ orders by bringing the ordered items in the shop on the day of the delivery.
Vernekar informed that the Silver items and 1 gram of gold found missing from Shop could have a value worth not above a lakh of rupees.
Police were alerted as early as 06.30 am on Wednesday who immediately swung into action and conducted the panchanama.
Canacona PI Chandrakant Gawas informed the investigation is taken up immediately after the incident was reported early Wednesday morning, stating the incident may have taken place somewhere between midnight and early wee hours of Wednesday.
When asked whether the police beat team were not on duty for Tuesday night, Gawas in the affirmative, informed though most police officials were deputed on election duty, and beat teams have been keeping close eyes in villages going to polls on Wednesday, the regular beat-police teams may have remained away from Chaudi town for some pooling
hours past midnight.
Incidentally, amidst several reports of distribution of money to influence voters late Tuesday night, many policemen kept strict surveillance in the seven panchayats going to polls on Wednesday.
Many of the business fraternity, including Jewellery shops, have, however, expressed their views that due to the presence of police beat teams in the commercial town of Chaudi has emboldened some miscreants to target the jewellery shop.
PI Gawas informed that though no clue has come to light, the investigation has been launched and expressed confidence that the culprits will be brought to book soon.