Will Govind be 2nd time lucky in Priol? 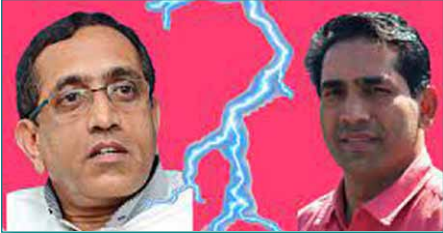 PONDA: Winning two consecutive elections by any politician has remained an uphill task in Priol.
So far, in the history of Priol, only Dr Kashinath Zalmi, Adv Vishwas Satarkar and then Deepak Dhavlikar have won two consecutive elections from Priol.
Today in the run-up to the 2022 elections, there is debate whether Minister Govind Gaude would manage to win a second time from Priol?
While some people feel that Minister Govind Gaude is sure to repeat the history of winning the second consecutive election, some feel it is difficult for him.
There is debate at nook and corner of constituency whether Govind Gaude will repeat the history of winning two consecutive elections?
After coming into existence as a constituency, Priol in 1989, it was won twice by popular opposition leader and former MLA Dr Kashinath Zalmi, who also became MLA in the 1994 election.
Before the formation of Priol, he had been elected from Cumbharjua Constituency. In the 1994 election, there was agitation against the Nylon 66 project and also an atmosphere against Dr Kashinath Zalmi. However, despite this Dr Zalmi managed to win the election by a slender margin of 1300 votes.
Later, in the 1999 election and 2002 elections, former speaker and BJP candidate Adv. Vishwas Satarkar had won the election twice.
In 2007, MGP candidate Deepak Dhavlikar defeated him. Deepak Dhavlikar was a second time elected from Priol in the 2012 election by defeating Govind Gaude with a margin of 2000 votes; however, in 2017, Independent candidate Govind Gaude took the support of BJP and defeated Deepak Dhavlikar with a margin of 4800 votes and also became Minister in BJP government.
After completing five years term, Minister Govind Gaude officially joined BJP recently and is now contesting on a BJP ticket.
Naresh Naik, a supporter of Govind Gaude, says, “it doesn’t matter for us whether Govind Gaude contests independent or on Party like BJP. We will support him.” While some voters feel there is an anti-incumbency wave against the BJP on account of inflation and increased fuel prices.
On this background, there is debate whether he would manage to repeat the history of winning a second consecutive term at Priol.
In the 2022 election, there were eight candidates in the fray, with Gaude facing strong rivals such as MGP candidate Deepak Dhavalikar.
Besides the challenge of the BJP rebellion, Sandeep Nigalye filed his nomination as an Independent candidate after Party denied him a ticket from Priol.
Sandeep Nigalye had staked a claim for a BJP ticket claiming he was a loyal party worker for two decades.
However, Party inducted Govind Gaude and gave a ticket to him, following which there was revolt and split in Priol BJP with some BJP workers rallying behind Govind Gaude, and some resigned stood behind rebellion Sandeep Nigalye. All the eight candidates had started their door to door campaigns.
Priol constituency is mostly dominant with voters from ST Community.
According to voters, a three corner battle is expected between Govind Gaude, Deepak Dhavlikar and independent Sandeep Nigalye.
Though there is Congress Candidate, the Party has not much influence. The last election, it got very few votes.
Thus besides the above three candidates, other candidates contesting from Priol are Digvijay Velingkar (NCP), Dinesh Zalmi (INC), Nonu Chandrakant Naik (AAP), Vishwesh Naik (Revolutionary Goans Party) and Dattaram Shetkar (independent).

***Hot election temperature at Priol. Vocal for local campaign prevails at Priol. Vocal for local means some candidates at Priol feels that Govind Gaude or Deepak Dhavlikar are outsiders at Priol in the sense that they are basically residents of Bandora in Marcaim. When this two Politicians contest at Priol, the locals do not get a chance to represent their constituency. However the history at Priol is that once MLA is elected people also elect him second time. However as Vocal for local campaign is started by some people it is Big challenge for Govind Gaude and Deepak Dhavlikar. Now Big debate is Will Govind Gaude repeat history of winning twice at Priol. ?