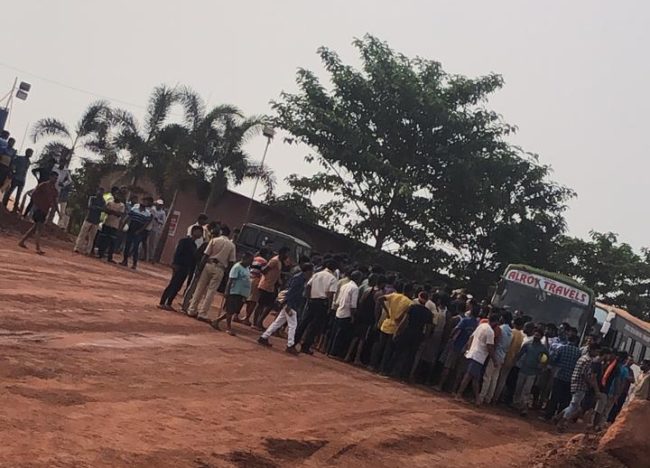 MOPA: Nearly 200 workers at the Mopa Internation Airport construction site again barged into the office and resorted to strike, alleging that they were not being paid their due salaries for the past several months.
The development comes days after the workers protested violently, pelting stones at the administration building and cars at the site.
There was no such incident today, but the workers did not report to work.
Immediately the police force was called in, and the situation was brought under control.
The administration, sources said, assured to credit the salaries in their account by afternoon.
In March, the stones pelting led to the damage to the administration block’s car windshield and glass panels.
They also attacked the ATC building with stones and damaged five four-wheelers.
“The contractor under whom the labourers are working has not paid their salaries, while the company has already paid the contractor,” sources said.
Mopa International Airport is an under-construction greenfield airport built at Mopa in Pernem taluka, North Goa district in Goa, India. GMR Goa International Airport Limited (GGIAL), a special purpose vehicle (SPV), will develop the airport.
The ₹ 3000 crore airport will be built under the Build Operate Transfer (BOT) model in four phases, with the first phase costing a total of ₹ 1,500 crores.
It was expected to be completed by the financial year 2019–2020 but has been delayed to 2022 due to a Supreme Court order that impeded work on-site and also due to the ongoing COVID-19 pandemic, which caused lockdowns, restrictions and curfews, resulting in lack of labour and delays in construction.