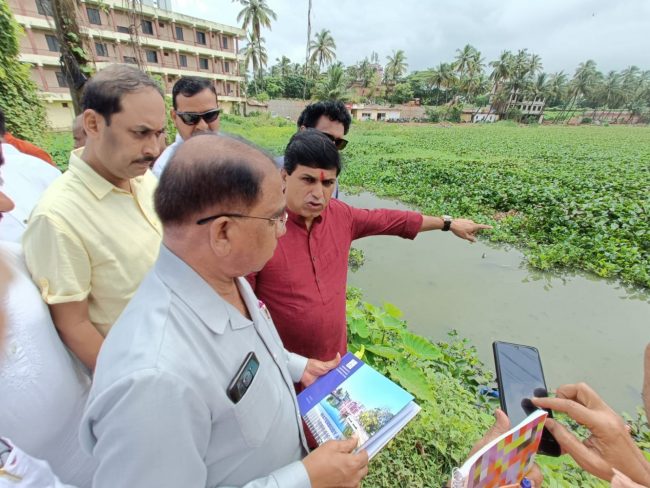 Goemkarponn desk
VASCO: WRD minister Subhash Shirodkar on Thursday inspected the Maimolem lake in the presence of Vasco MLA Krishna Salkar, MMC Chairperson Leo Rodrigues and other staff of the WRD department
Speaking to reporters after the inspection, Shirodkar said that the Maimolem lake would be beautified and developed under the ” Amrut Sarovar” initiative launched by the centre. Shirodkar said that the ” Amrut Sarovar” scheme had been launched wherein 150 water bodies, 75 each in North and South Goa.
“Maimolem lake is one such water body identified in this scheme, and all these water bodies will be beautified and developed under this initiative. This will be done within the next year or two, so I have visited the lake. We will start with the de-weeding in the next 15 days, followed by de-silting and finally launch other amenities for the lake while we improve the water quality of this lake using the latest technologies and machines. ” said Shirodkar.
Shirodkar said that the department had already prepared the file for the beautification project of Maimolem lake and that works would begin soon.
“We have instructed the engineer to draw a detailed map of this lake to identify the area which brings in dirty water and the outward flow channel. We will have another meeting with Vasco MLA Krishna Salkar to discuss how we can prevent sewage water flow and, if required, initiate stringent action on people responsible for the discharge of sewage in water bodies, a criminal offence,” said Shirodkar.
Shirodkar said there had been various plans for Maimolem lake over the years.
“Plans are never fixed and always subject to improvement, and whatever plans proposed in the past will be considered and improvised after consultation with Councillors, MLAs, architects and local residents,” said Shirodkar.
Vasco MLA Krishna Salkar said that the WRD department led by Minister Subhash Shirodkar had been very efficient in taking up a lot of people’s beneficial works within a few months of the Government being formed.
“I had requested Shirodkar to take up some development of the Maimolem lake, which has a great potential as a water body. If restored and developed, this water body can provide Vascokars with a great place to visit for recreational purposes or even walking around the periphery as a form of exercise,” said Salkar.
“Minister immediately agreed, and we already have plans in place, and we will also approach all stakeholders including traditional farmers and communidade body. I don’t think anyone will object to the development of this lake which is in a very sad state. The development of this lake will boost the city’s beauty and the lakes’ surroundings,” he said.
“I will also have a joint meeting with Shirodkar and all the stakeholders, after which WRD and Tourism department will jointly beautify and develop this lake,” said Salkar.