Yukk!! No Fish but Canacona fish market full of worms, unfit to occupy and visit 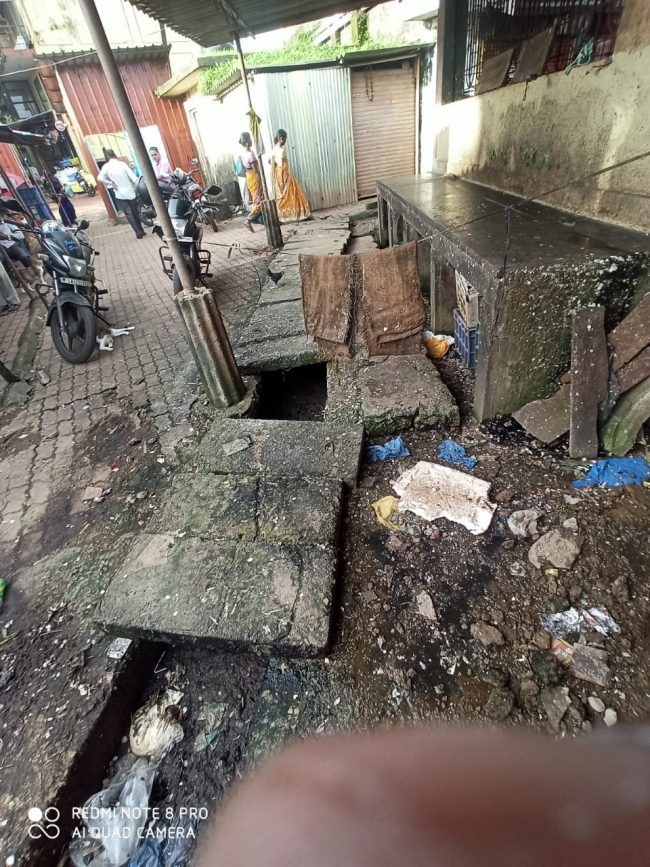 Goemkarponn desk
CANACONA – Forget about fish buyers visiting the badly maintained Canacona municipal fish market, but the uncleanliness and presence of crawling worms make the fish-selling women stay away from the market complex.
The atmosphere is pathetic and unhygienic in and around the only Fish-market of Canacona municipality located in the heart of Chaudi town.
The fisherwomen of Canacona are accused of not using the Fish-market to sell their fish and instead are often taken to tasks of blocking public movements out in the space outside the Market.
‘How can one even sit on these platforms inside the fish market, which are full of worms and other pests all around? This Market had not witnessed any cleaning of any type of months together, nor a single drop of water is ever used to clean the fish-dirt accumulation.’ said a fish-selling woman pointing to the worms crawling on the platforms.
Incidentally, while the entire Fish-market has a vitiated atmosphere not favourable for any humans to occupy, let alone visit, the surroundings are equally more than worst, with the choked drainage and the all delipidated and doorless toilets. 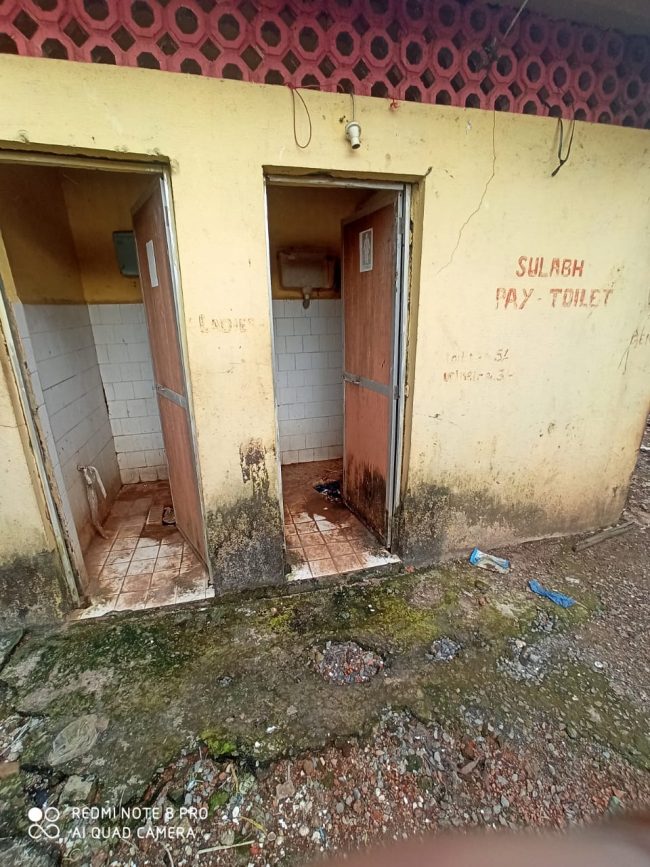 While most Fish selling women seldom occupy the market platforms, women squat out in the open displaying their fish. In fact, initially, some women braving the ugly atmosphere were sitting inside the Market were not getting any buyers ever willing to enter the Market. Instead, the fish buyers were making their purchases from the fish vendors sitting outside and leaving. Later, all the fish vendors (Fish Selling Women) who had their fish-selling plots (Platforms) inside the Market began a practice of sitting out in the open and selling fish.
Councillor Dhiraj Naikgaunkar, pointing to the grave and the inhumane situation at Fish Market, sought the council’s immediate attention and cleaned up the mess generated by the non-functioning of the civic body.
‘CMC should immediately take the team responsible for maintaining the Cleanliness of this Market to the task. The reported reason not to clean the existing and working Market as a new one is planned doesn’t hold good for any common man ‘, Naikgaunkar said.
When asked, CMC Chairperson Simon Rebello said the concerns are already directed to maintaining the Cleanliness of the fish market, but at the same time, construction of a new fish market is on the anvil.
‘Yes, certain expenses are required to maintain the existing Market, but a few feel expenses made now are not required, especially when CMC is already demolishing it for a new market. CMC has already received Administrative Approval of 3.65 cr to construct a new state-of-the-art Fish Market for Canacona, which will have a capacity to accommodate approximately 200 fish vendors. With this, not only will Canacona get a full-fledged Fish-market equipped with all necessary amenities, but all the fish vendors and Fishermen selling their catches across the Municipal streets will be accommodated in the Market.
Incidentally, besides Fishermen squatting outside the fish market, a lot of local as well as other fish vendors occupy the roads, beginning at Palolem, Palolem -Agonda junction, Char-rasta, the entire stretch of NH-66 at Nagorcem, Ponsulem and Xeller.