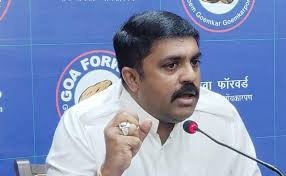 Goemkarponn desk
PANAJI: Goa Forward Party (GFP) President Vijai Sardesai today said that eight legislators who have decided, against all political propriety, basic decency and honesty, to pursue their greed for wealth and hunger for power stand today as the symbols of pure evil.
“The people of Goa are backstabbed, and their faith destroyed first by oaths and then this betrayal, and they will note that this act of perfidy comes on the Hindu auspicious period of Pitru Paksa when these MLAs chose to repay their debts to their ancestors in this devious and false-hearted manner,” said Sardesai
He further said that we often see political defections as a betrayal of the people’s mandate, but it’s much more than that. It’s a betrayal of the people, subversion of the political and democratic process, the repudiation of their own parentage, and the denigration and mockery of God.
“This scornful act of undisguised disloyalty and treachery towards the very people who elected them will never be forgotten by the people of Goa, who have reached the limit of their patience and tolerance for such enemies of the people, and will respond to them in a fitting manner,’ he added.
Sardesai said that the BJP, which is in power not because of the mandate of the people but because of deceit and manipulation, has lowered democracy and parliamentary politics to its nadir, and reduced Goa to ridicule by treating people’s representatives as commodities, like sacks of wheat, to be bought for a price; and the unscrupulous and unfaithful MLAs have allowed them to be purchased like cattle.
“We will, as a party, fight this political plague that has destroyed Goa and appeal to true Goemkars to reject these traitors with the contempt they deserve from our civilised and discerning society and brand them as enemies of the people and God,” he added.