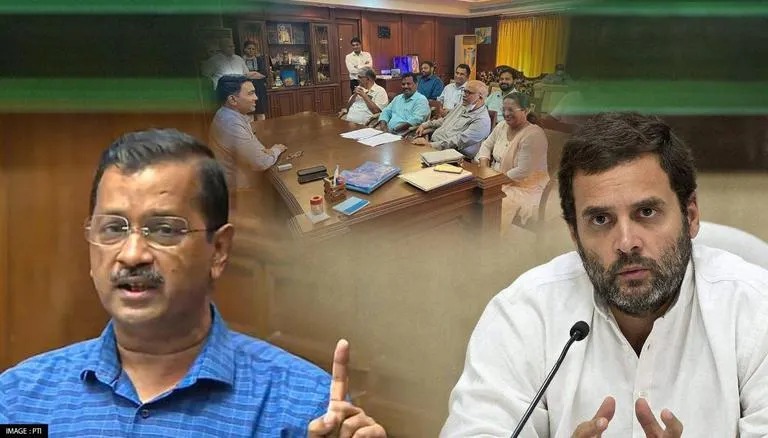 Goemkarponn desk
NEW DELHI: On Wednesday, the AAP mocked the Congress party after 2/3rd of its MLAs in Goa, including ex-CM Digambar Kamat and LoP Michael Lobo, jumped ship to BJP. Taking to Twitter, Rajya Sabha MP Raghav Chadha contended that whenever people vote for a Congress candidate, it is a mandate for a potential BJP MLA. In the run-up to the Goa Assembly election this year, AAP regularly urged the electorate to not waste their vote on Congress owing to its history of defections. At present, the Arvind Kejriwal-led party has two MLAs in the 40-member Goa Assembly.
Meanwhile, AAP MP Sanjay Singh took a swipe at Rahul Gandhi for leading the Bharat Jodo Yatra even as his party continues to crumble. He quipped, “On one hand, ‘Bharat Jodo’ is going on. On the other hand, ‘Congress Chhodo’ is going on”. Addressing a press conference, AAP supremo Arvind Kejriwal attributed the defection of Goa MLAs to ‘Operation Lotus’. He also accused BJP of trying to poach AAP MLAs in Punjab by offering them Rs.25 crore each.
Delhi CM Arvind Kejriwal remarked, “They are running Operation Lotus for every state. They are buying MLAs in every state. Obviously, they are not buying MLAs for free. They scare them with CBI and ED. We learnt that in Punjab, they tried to poach MLAs with Rs.25 crore. The people of Goa can reveal the price at which they bought the MLAs. This is not a good thing. What is the source of the thousands of crores of rupees used to buy MLAs? This is government money that is being siphoned off. That’s why inflation is increasing.”