Ahead of Christmas, Gadkari Showers Goodies on Goa 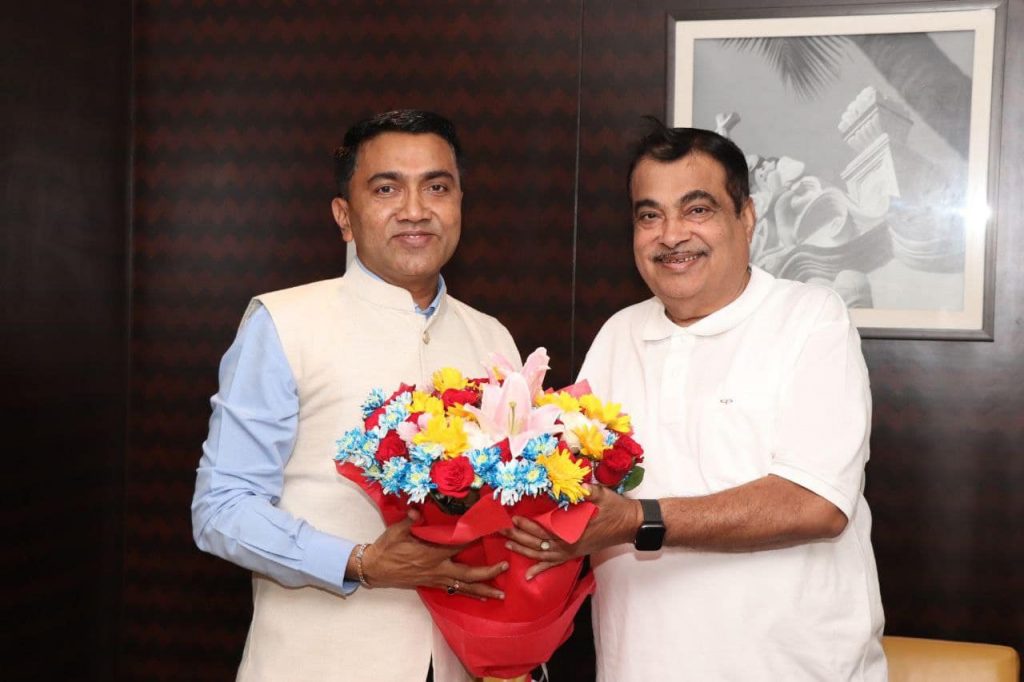 Goemkarponn desk
PANAJI: Goa chief minister, Pramod Sawant on Sunday, met Union Minister Nitin Gadkari here to discuss road and highway infrastructure in the state.
Sawant said they discussed road and highway infrastructure issues, adding that Gadkari was always positive in giving “much-needed Central assistance to Goa”.
“Met Union Minister for Road, Transport and Highways Nitin Gadkari Ji at Panaji, Goa. Discussed various issues related to the road and highway infrastructure in the state,” CM Sawant said.
He said Gadkari has always been positive and forward-looking in giving much-needed Central assistance to Goa.
“He has further asked us to propose projects to be undertaken in the state, especially in the e-mobility & green energy sector, and has assured all the necessary assistance from the Union Govt,” he said.
State transport minister Mauvin Godinho, who also met Gadkari during the day, said the latter had promised to provide 250 electric buses as part of an upcoming scheme.
Godinho said he had a fruitful discussion with the Union Minister, Transport Director Shri Rajan Satadekar and KTCL MD Derrick Neto at Grand Hyatt, Bambolim.
“Gadkari ji has promised to provide 250 Electric Buses under an upcoming scheme (MORTH scheme) which will aid the Transport Sector. I applaud Gadkari Ji’s love for Goa and his efforts to make it better for the people of Goa,” Godinho said.
He said developing the Bus Stands into Bus Ports, having no third party involved (Central Government to State Government) to strengthen Goa as a Tourism state.
“I am also proud to announce the upcoming Flyover from Dabolim Junction to the Verna Junction along with 7 additional Junctions that will be considered and are in progress as promised by Gadkari Ji,” he tweeted.