* Entire Berger Paints factory down to ashes; massive losses to the company

Goemkarponn desk
PILERNE: 24 hours after the massive fire broke out at the Berger Beckers Coatings Pvt Ltd factory at Pilerne IDC, officials said it continued to rage in some parts of the basement.
“The fire is now under control. Only in some parts of the basement is there still come rage. We have used 12 lakh litres of water to douse the fire and about 4 tonnes of foam,” said DFES officials.
The Fire and Emergency Services said that nearly 100 fire brigade staff, Navy, Defence, and MPT staff worked round the clock to douse the fire.
A massive fire broke out at Berger Becker Coatings Factory at Pilerne Industrial Estate yesterday. The blaze began at 2.40 pm yesterday.
No one was injured in the incident. A short circuit is suspected to be the cause of fire.

A company staffer said that the loss would be massive as the entire factory has turned into ashes, and it will take quite some time for the company to rebuild the factory.

The factory contained a large quantity of paint and chemicals, due to which the fire escalated and engulfed the entire factory.
Several fire tenders from nearby towns, including Pilerne, Porvorim, Mapusa, Panaji, Kundaim, Ponda, Curchorem and Margao, have been pressed into service to control the raging fire.
Also, water tankers, both private and Navy, were also put to task to curtail the spread of fire to adjacent buildings.
IDC Chairman Alexio Reginaldo Lourenco said that fire tenders were called in from across the state. 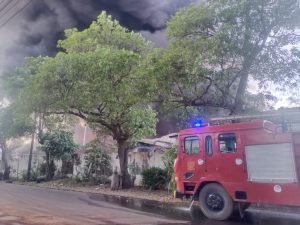 He further said that fire fighters had requisitioned Foam to control the fire, and if required, help would be sought from Indian Army.
Sources said that blasts were being reported from inside the factory, which had huge quantities of chemicals stored inside.
The fire was so huge that the smoke from the flames was visible from several kilometres away, including Panaji.
Sources said that around 94 to 100 workers were working in the factory when the fire broke out.
Rajesh Mehrotra, Managing Director of Berger-Becker, said the factory has two buildings, and a fire broke out in the building where raw materials used in the manufacture of paints were stored, causing major damage.
He further said that around 2.30 pm, there was a fire alarm, and that is when we immediately the first thing we did was remove all the people away from the site. 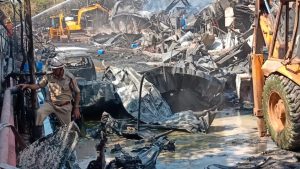 “There were 94 persons, and we took them out. The second was to control the fire, but our firefighting team could not do that, so we called the fire brigade, and they came immediately. We are trying to ascertain the reason for the fire, but prima facie, it looks like a short circuit,” Mehrotra said
Director of Fire and Emergency Services Nitin Raiker said that the factory was functioning when the fire broke out, and the workers rushed out of the factory to safety. 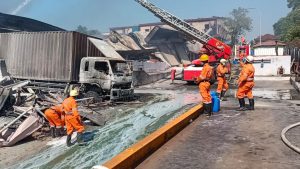 Meanwhile, the Directorate of Health Services issued a Health Advisory which mandated circulation of fresh air in all buildings (both residential and commercial) by keeping doors and windows open and switching on ceiling fans, exhaust fans, etc., especially in bedrooms with a 2.0 kms radius.
“Avoid using face masks; in case of any symptoms of breathing difficulty, contact the nearest Health Centre (or) the casualty of Goa Medical College (or) 108 services,” it said
The advisory also said that the use of air-conditioners should be avoided and that high-risk people with asthma or chronic respiratory illnesses and infants are advised to be shifted to safer areas till the situation comes under control.