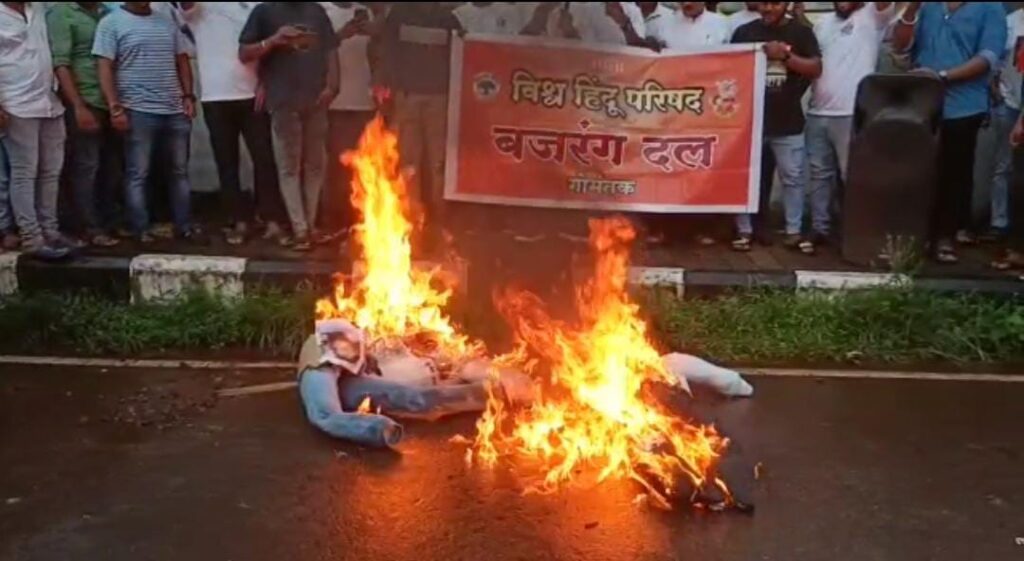 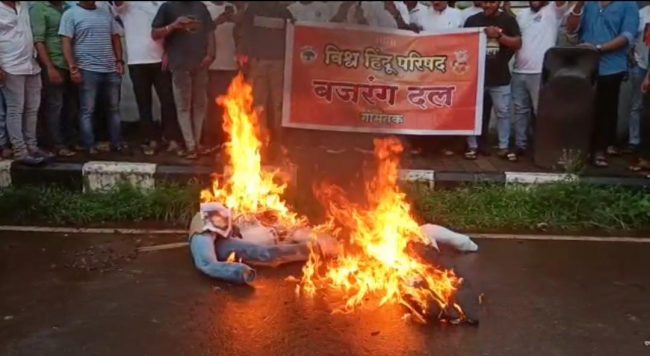 Goemkarponn desk
CURCHOREM: Bajrang Dal members from Curchorem protested by burning effigies condemning the murder of Kanhaiya Lal in Udaipur Rajasthan a few days ago.
During the protest in Curchorem, Mohan Amshekar of Vishwa Hindu Parishad said that VHS and Bajrang Dal will not tolerate such incidences if it happens again.
He further said that Hindu society is divided into different castes. The terrorists and fanatical Hindu opponents are taking advantage of this. For this, all should forget caste discrimination and come together as Hindus.
“Our movement is against terrorism and not against any caste or religion. Certain sections of the people are motivated from childhood to become terrorists, and they are forced to engage in such antisocial activities. The central government and the state government should take stern action against them,” he said.
Viraj Desai said earlier that there were only terrorist attacks on the country’s borders, but now there is an increase in terrorist activities inside the country, and as such, Bajrang Dal activists should unite to respond to this.
Desai said, “Whether it is legal or illegal, we will not allow cow slaughter in the state”.
“Some people are trying to challenge our religion by slaughtering cows. They should stop immediately; otherwise, they will have to face the consequences,” he said.
During this protest at the Curchorem bus stand, Ricky Hornekar, Sanket Arsekar, Viraj Desai, Sujay Sawant Desai, Banesh Naik, Kisan Sawant, and a large number of Bajrang Dal activists were present when the effigies of the two terrorists arrested in Udaipur were set on fire.