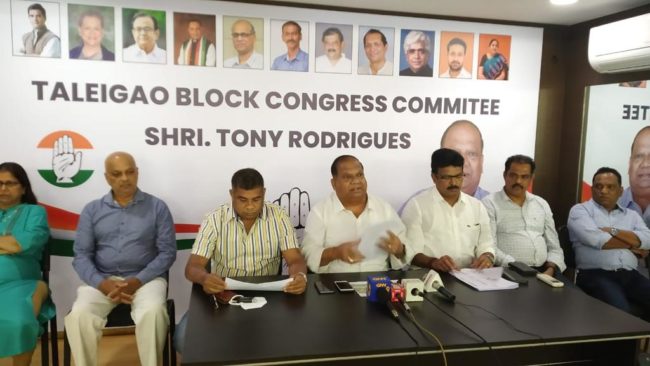 Goemkarponn desk
PANAJI: Congress leader and Taleigao constituency ticket aspirant Tony Rodrigues has filed a complaint with teh Chief Electoral officer about adding bogus names to the electoral rolls.
Addressing a press conference, along with former Mayor Uday Madkaikar, after submitting the complaint, Rodrigues, without any politician or person, said that the attempt is being made to vitiate the process of free and fair elections.
“There is a strong apprehension based on the current situation in the Taleigao Constituency that some individuals may make an attempt to fabricate the Voters / Electoral list by adding bogus names to vitiate the
process of free and fair elections and thus in turn
deliberately abuse and interfere with the due process
of law,” Rodrigues said.
He said the CEO office has all the powers vested in
him to put an end to the said deliberate attempt on the part of some anti-social elements to disrupt the process
of free and fair elections for personal gains.
“Various other States in our Country have already made efforts to ensure such fake/bogus voters who are added to the electoral / voters list are deleted, and action is initiated against any individual found to be making efforts to be a part or perpetrate such a fraud which is a crime in itself, the undersigned requests your good office to undertake similar steps and to ensure strict compliance of the same,” he said.
He said the sole goal of the complaint is to solely ensure that the Election process is not vitiated in any manner and that the Elections are conducted in a free and fair manner.
“Being a social worker and moreover, an individual who is concerned about the state of affairs not only of the present Constituency but of the State of Goa as well, the I will assist your good office in any manner required as and when requested to do so,” he said.