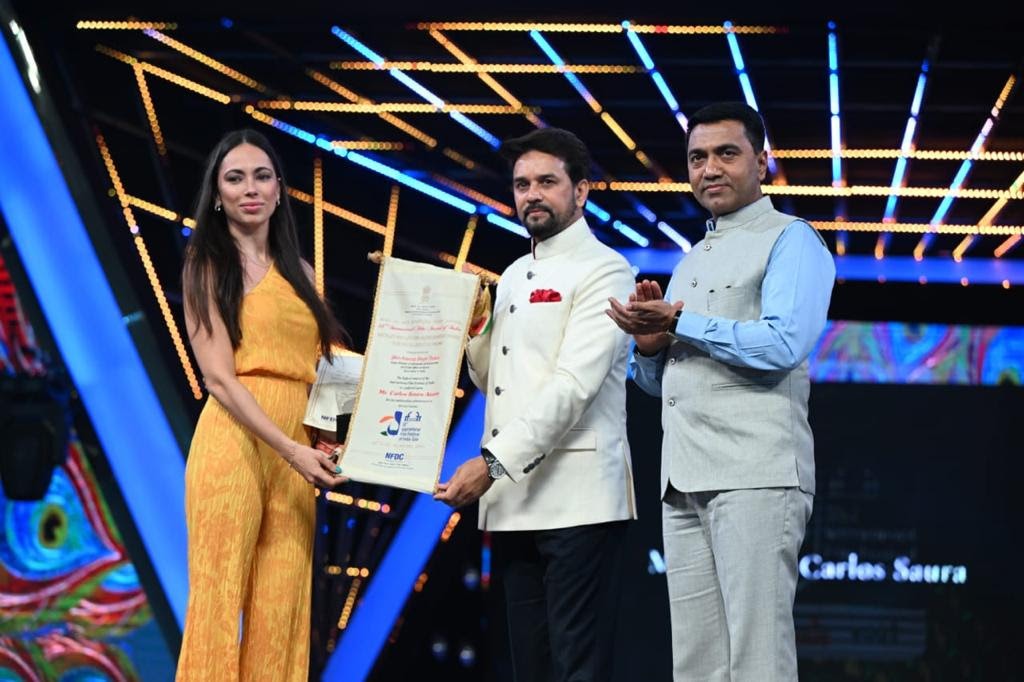 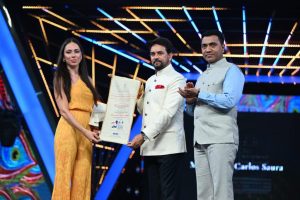 Celebrated Spanish film Director Carlos Saura has been honoured with the prestigious Satyajit Ray Lifetime Achievement award at the gala opening ceremony of 53rd edition of the International Film Festival of India (IFFI) in Goa today, 20 November, 2022.
The Spanish Director is being honoured with the award as a befitting accolade for his immense contribution towards the international cinema. His daughter Anna Saura accepted the award on behalf of the eminent filmmaker at the opening ceremony IFFI 53.
Expressing his gratitude for being presented with the coveted Award, Carlos Saura, through a video message, said he could not come to the ceremony personally since he is recovering from Bronchitis. The acclaimed film maker expressed his deepest gratitude and love towards festival organisers for bestowing him with the honour.
While congratulating the celebrated filmmaker on winning the award, the Union Information and Broadcasting Minister Anurag Singh Thakur said Mr Saura is a master who has devoted his life for the art of film making and distinguished himself as one of the greatest in the field of film making and photography.
Showering Mr. Saura with praises for his dedicated life towards cinema and cinematic excellence, Shri Anurag Thakur said Mr Saura has been making films for many decades and continues to be active behind the lens at 93 years of age! “He has won heaps of awards and nominations in his entire lifetime and I am glad that his daughter Anna Saura has accepted the award on behalf of the eminent filmmaker at the opening ceremony of the 53rd International Film Festival of India,” the Union Minister said.
At IFFI 53, a retrospective of Carlos Saura’s legacy is being showcased through screening some of the auteur’s celebrated award-winning films.
Carlos Saura, is considered to be one of Spain’s most renowned filmmakers. He has a long and prolific career that spans over half a century. He has received the Golden Bear for Best Director at the Berlin International Film Festival for Deprisa Deprisa, along with two Silver Bears for La caza and Peppermint Frappe, a BAFTA for Carmen and three awards at Cannes, among several others.
With a long and prolific career spanning over half a century, Saura’s films are sophisticated expressions of time and space fusing reality with fantasy, past with present, and memory with hallucination. His noted works include , Cousin Angélica, Mama Cumple 100 Años, the Flamenco trilogy Blood Wedding , Carmen, and Love the Magician among others.