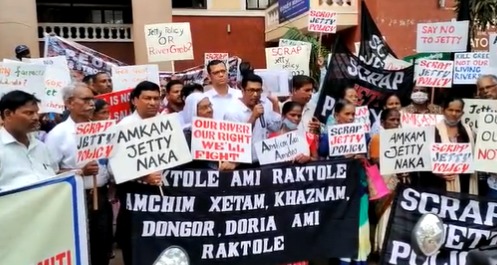 Environmentalist Abhijit Prabhudesai said that the proposed jetty policy was prepared by keeping the people in the dark.

“The proposed jetty policy will create a huge impact on the fishermen communities, besides public in general, as khazan and agricultural land will be destroyed completely.” said Prabhudesai

He further claimed that neither proper study nor any data was collected before proposing the jetty policy by the government. Rivers will go in the hands of private parties, if implemented.

“We must not allow the government to sell those rivers for private brokers or builders to concretize them.  We have submitted objections before the tourism department pertaining to the proposed jetty policy,” he informed.

They also said that the draft jetty policy was restricted only to the tourism department website while no copies were sent to the village panchayats or municipalities.

The locals further said that the jetties management committee, which has neither the knowledge nor the necessary experience, is arbitrarily empowered to carry out carrying capacity studies of rivers.

It is pertinent to note that the 15-days extension period to file the objections and suggestions gets over on October 15.

Goa tourism had said that the new jetty policy was aimed at tourism, not coal movement.
The new jetty policy of Goa seeks to give a boost to tourism and is not aimed at facilitating movement of coal as alleged by some sections of people, the state tourism department

It said the policy was being wrongly interpreted and many persons were giving misleading statements on it, a release from the department issued during the day said.The policy is only applicable to vessel operators and jetties being utilized for tourism purposes.