Congress Vows to Follow Patel, Indira To Save India from Divisive Forces 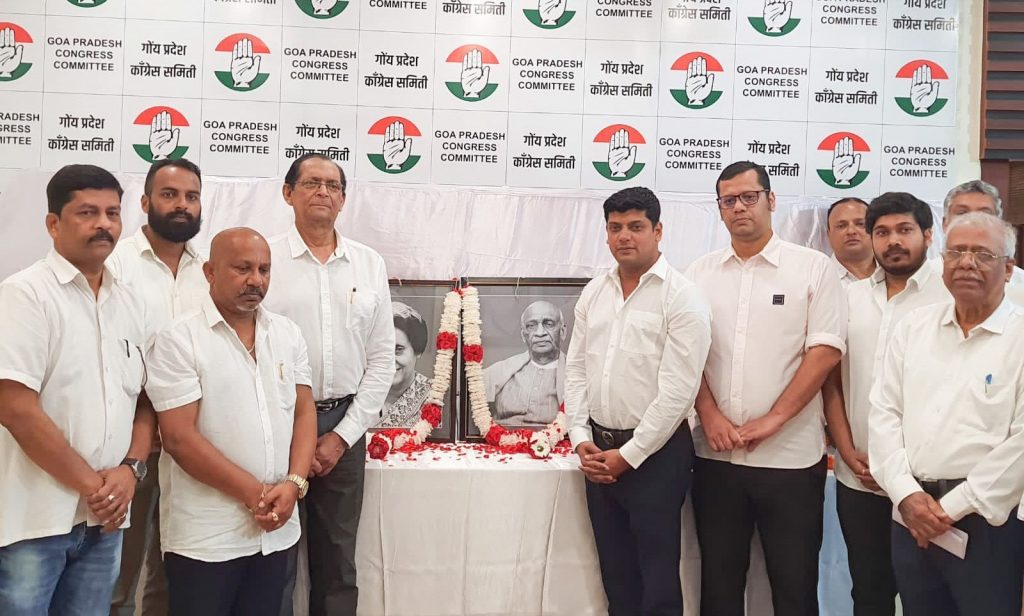 Goemkarponn desk
PANAJI: The Goa Pradesh Congress Committee, while commemorating the Birth Anniversary of Sardar Patel & Death Anniversary of Indira Gandhi at Congress House here, vowed to save India from divisive forces.
“Sardar Vallabhbhai Patel, the first Deputy Prime Minister of Independent India, tackled the most intricate and baffling problem of the States’ integration into the Union of India. With his tact, powers of persuasion and statesmanship, he managed in less than a year, to reduce the Princely States from 562 to 26 administrative units and bring democracy to nearly 80 million people of India, comprising almost 27 per cent of the Country’s population,” stated Congress President Amit Patkar.
Patkar said the iron Lady & former Prime Minister Indira Gandhi sacrificed her life for the Country.
“She conducted herself with remarkable patience and restraint. She decisively won the 1971 India-Pakistan war – splitting Pakistan into two, with the new Country, Bangladesh,” stated Leader of Opposition Yuri Alemao.
Sardar Patel & Indira Gandhi have immensely contributed to nation-building. It is the duty of every citizen to follow their ideals which will help safeguard democracy, stated South Goa MP Francisco Sardinha.
Congress Leaders said that time had come to Save India, which was United by Sardar Patel & Protected by Indira Gandhi.
Congress President Amit Patkar & Leader of Opposition Yuri Alemao, MP Francisco Sardinha, Quepem MLA Altone D’Costa, and other Congress Functionaries paid floral tributes to the portrait of Sardar Patel & Indira Gandhi.
Congress Functionaries also observed silence as a mark of respect to all those who lost their lives in the Cable Bridge Collapse tragedy at Morbi in Gujarat and prayed for early recovery of those injured in the accident.
Senior Vice President M K Shaikh, former Deputy Speaker Shambhu Bhau Bandekar, and Media Cell Chairman Amarnath Panjikar also paid tributes to the two leaders.
Congress Functionaries Arch. Tulio De Souza, Gurudas Natekar, Savio D’Souza, Saish Aroskar, Adv. Archit Naik, John Nazareth and others were present for the function.