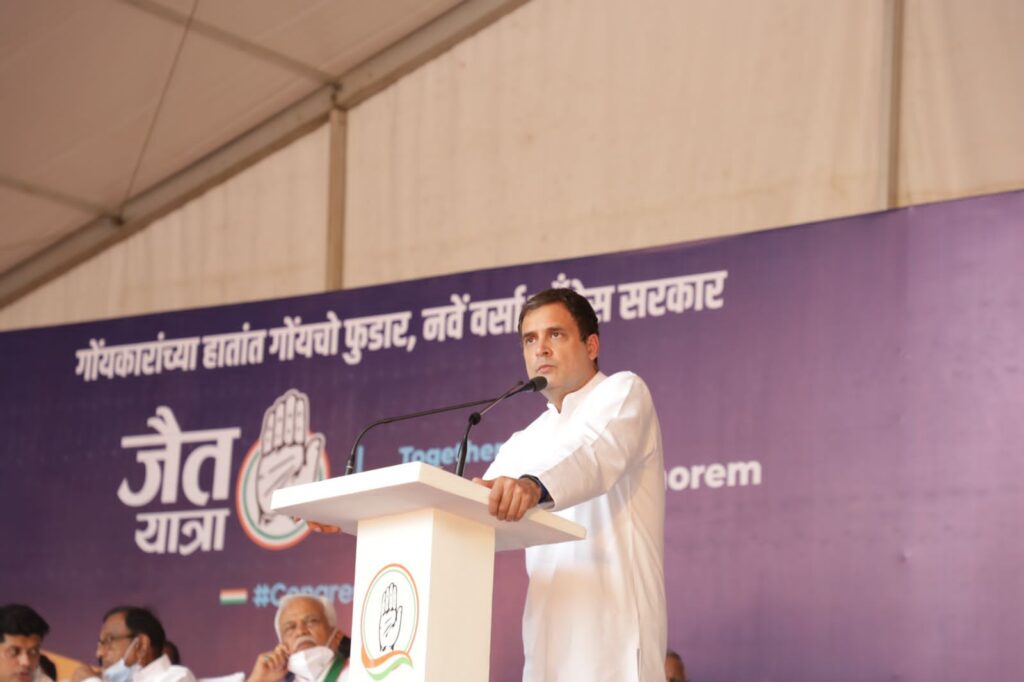 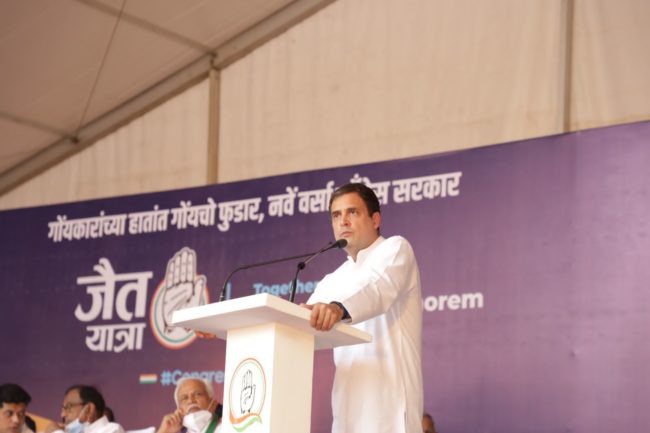 CURCHOREM: The Congress leader and MP Rahul Gandhi on Friday stated that mining resumption will be done in legal ways, and will scrap the projects which are not in the interest of people of Goa, no sooner the party forms government.

He was addressing public meeting at Curchorem. Curchorem candidate Amit Patkar was present on the occasion.

“New government should be of all people, youth, farmers, and workers. We will make decisions by taking people into confidence.” He said.

“We will scrap the coal hub as it is not benefiting people.” He said.

“We will give Rs 6000 to poor families of Goa. Also 30 per cent reservation for women in government service. We will create employment and also revive the tourism sector.” He said.

“BJP has divided the nation in ‘Amir Hindusthan’ and ‘Garib Hindusthan’. Richest persons are gaining wealth and our poor people are deprived of unemployment, services in hospitals, education and Oxygen. We want to change this scenario.” Rahul Gandhi said.

He said that inflation will be controlled and petrol rate will be capped at Rs. 80 per liter.

He appealed to people not to give a scope to split the votes.

Digambar Kamat said that people have decided to send BJP home. “Teach a lesson to BJP for mishandling COVID and killing patients by not providing oxygen supply. He has done destruction of the environment.” He said.

Sardinha appealed to people to vote for Amit Patkar and make him win. “BJP has ruined Goa by destroying the environment. Hence, to steer Goa we need to elect Congress candidates.” He said.

Alka Lamba said that inflation is increasing every passing day and the BJP government failed to control it. “Prime Minister Narendra Modi failed to give 2 crore jobs. He has failed to resolve the issues.”He said.

“Last time we could not get a majority, but this time we have hope that we will get a full majority.” She said, adding people want change in Goa.

She alleged that AAP and TMC have been brought by BJP to divide the votes. They are doing experiments here.

Lamba said that defectors were not given tickets to respect the sentiments of Goan people. “We decided not to give tickets to such persons who betrayed the people of Goa.” She said.

She said that within one hour of getting a majority, Congress will stake a claim to form a government.

“Women empowerment, sports and all other promises made in our manifesto will be fulfilled. We will also resolve the issue of water supply.” He said.