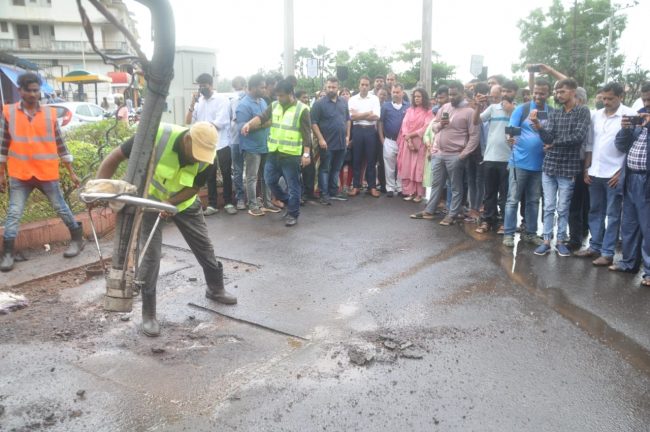 Goemkarponn desk
PANAJI: PWD Minister Shri Nilesh Cabral launched the Jetpatcher machine on Wednesday, which will help fix the potholes in the State at Taleigao.
Speaking on occasion, Cabral said that this machine is used not only in India but across the globe in various forms to fill the potholes.
“Every year, we face the problems of potholes during monsoons. The reason behind the causes of potholes is mainly due to digging of the roads by the agencies/PWD dept to carry out the work of laying cables, water connection, sewage connection etc.,” he said.
Taking all this into account, the PWD department has procured two Jetpatcher machines, he said.
“One machine each will be stationed in both the districts, he informed and added that the work order for this would be issued on a nomination basis, as the company has given us an 18-month guarantee after repairing the pothole and based on which the department has given them a work order. The dept will also monitor their work,” he pointed.
Speaking further, he informed that the app developed by the PWD department is currently accessible only to junior engineers.
“They will visit various areas for the next two months and click pictures of potholes which will be sent to the contractor. The contractor will repair the potholes. The app will be named after taking suggestions from the public and will be made accessible to the public soon,” he remarked.
Cabral also had a live demonstration of the pothole patching.
Present on occasion were MLA, Taleigao, Jennifer Monserrate, CCP Mayor Rohit Monserrate and others.

Goemkarponn Desk PANAJI: Bailancho Saad has strongly condemns the brutal violence unleashed on the peaceful protestors, mostly women of Mellaulim, who are demanding that the ... Read More