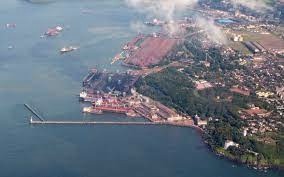 BJP government for surrendering to the central government regarding eliminating port limits and capping of coal handling.
Addressing the media, GFP Leader Vikas Bhagat said that the NCZMA has rejected issues raised by GCZMA regarding the capping of coal handling and eliminating the limits of the port.
“It is a shame for Goa as the BJP led government has surrendered to the central government regarding eliminating port limits and capping of coal handling,” said Bhagat.
He further terms the state government as a disaster engine government.
Bhagat said that Goemkars are witnessing incidents of betrayal and corruption by the BJP government.
“In every department, corruption is taking place under the leadership of Chief Minister Pramod Sawant. Besides this, a BJP Minister was also exposed to a sex scandal. What can we expect from this government.” Bhagat questioned.
He said the Mormugao Port Trust in South Goa is using The Major Port Authorities Act 2021 “to gobble up nearly the entire coastline and all riverbanks” and the nationalization of six Goan rivers along with the three linear projects in the Western Ghats – doubling of railway tracks, four-laning of a national highway and the Goa-Tanmar Transmission Project – will rob Goa of its natural heritage.