Give “injection of rejection” to Cong: Smriti Irani 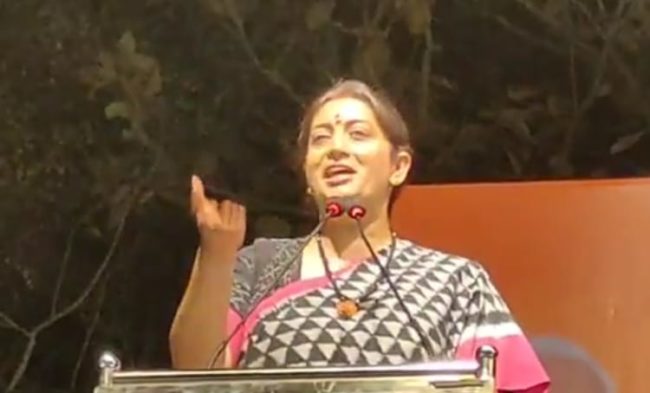 MARGAO: Union minister of BJP Smriti Irani advised the people of Margao to “give an injection of rejection to Congress party and vote for BJP”. Irani questioned why people should vote for Congress whose candidates have to give an affidavit to their party, which shows the lack of trust.
Union Minister of India Smriti Irani, in his address at the public meeting in Margao, said that the Congress leader who is talking big things have to take affidavits from their own candidates. When their party leaders don’t trust their own candidates, why should people trust such a party and vote for them? Irani questioned. She further suggested that people vote for BJP on February 14 and bring BJP to power in Goa.
Citing her own example from Amethi, she said the people from Amethi trusted BJP this time and defeated the rival candidate because BJP does not discriminate against people, and their schemes and benefits reach out to each and every person.
Irani further reminded that during the COVID pandemic, people got essential grocery items for 19 months in Goa and in the country for free. In the country, 80 crores and in Goa 1 lakh 40 thousand people got these benefits during the pandemic time. She questioned whether if Congress was in power at the centre, would people get these free grocery items?
“The vaccine during the pandemic time for free was given by the BJP government. If it was the Congress government, would people get the free vaccine? Therefore “people should give an injection of rejection to Congress on February 14 and vote for BJP,” She added.
Irani said that BJPs development is seen in Atal Setu, New parallel Zuari bridge, electricity connections, water connections given to several houses. She said that Prime Minister Narendra Modi gave toilet facilities to every household in India after coming to power. In Goa, over 1 lakh families who were not having toilet facilities got the facility after BJP came to power.
She concluded by stating that those who are opposing the policies of the BJP for their own self-interest, these people’s deposits should get seized, and these people should be sent back home.
Margao BJP candidate Manohar (Babu) Azgaonkar, during his address at the public meeting, said that BJP is the party that has brought several public welfare schemes, and the party needs to be strengthened more.
Taking indirect potshots at his opponent, Congress candidate Digambar Kamat, Azgaonkar alleged that his opponent was engaged in distributing 2000 rupees in the utensils in the slum areas during the election campaign. What kind of self-esteem and self-respect ideal will he preach to Margaokars? Azgaonkar questioned.
Azgaonkar further pointed out that in the last 27 years, Digambar Kamat has failed in giving good governance and good facilities development in Margao and therefore people of Margao should give Babu Azgaonkar one chance. He said slum areas from the Margao constituency, deprived of good facilities for many years, should get all proper facilities. The businessman should get business in Margao, and for this thing to happen, people should vote for him, Azgaonkar added.