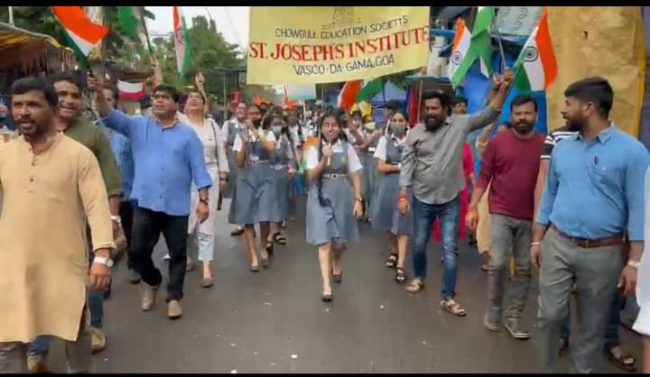 Goemkarponn desk
VASCO: In a rare display of immense patriotism, around 500 students of St Joseph school set an example and motivated the BJP Leaders, including Vasco MLA to keep the slogans chanting even after the Prabhat Feri culminated at the school
The energy display was such that the headmistress, Vasco MLA and BJP Mandal President Deepak Naik had to chant slogans for the next 30 minutes because the students who arrived back at the school just refused to stop chanting slogans ” Bharat Mata Ki Jai ” and ” Vande Mataram.”
Finally, BJP Mandal general secretary Girish Borkar went amidst the students and continued the slogans using the Mike and sound systems, much to the surprise of everyone present during the Prabhat Feri.
It was finally, after the headmistress took charge, that the Feri officially culminated. Students were seen going back to school classrooms while continuously chanting slogans in the chorus as they moved towards their classrooms.
The Prabhat Feri was flagged off by Vasco MLA Krishna Salkar in the presence of Vasco Mandal President Deepak Naik, and other BJP Karyakartas at 8.30 am
The Prabhat Feri began from the school, and students holding the National flag moved along the F L Gomes Road and finally arrived back at the school at around 9.30 am but was continued till around 10.15 am due to the active participation of students.
A video of Girish Borker leading the students outside the school has already been posted on various social media handles
Speaking to the media , Vasco MLA Krishna Salkar said he was inspired by the immense patriotic energy displayed by the students
“We are in awe of these students who have displayed such immense energy during the Prabhat feri. We are commemorating the 75th year of Indian independence, and Prabhat Feri, Bike Rally, and Prabhat Feri are a part of these programs. The Government has relaxed the flag code for three days so that we can get a golden chance to hoist a national flag at our houses and establishments. I congratulate the students and teachers of Schools who have participated in the massive Prabhat Feri while chanting patriotic slogans. I appeal to the people to install the national flag at their houses and make the Har Ghar Tiranga a grand success in Vasco,” said Salkar
Meanwhile, Vasco BJP Mandal President Deepak Naik also spoke on the various programs lined up in the entire week ahead of the 75th Independence day