Lobo says he is firmly with Congress; refutes rumours of joining BJP 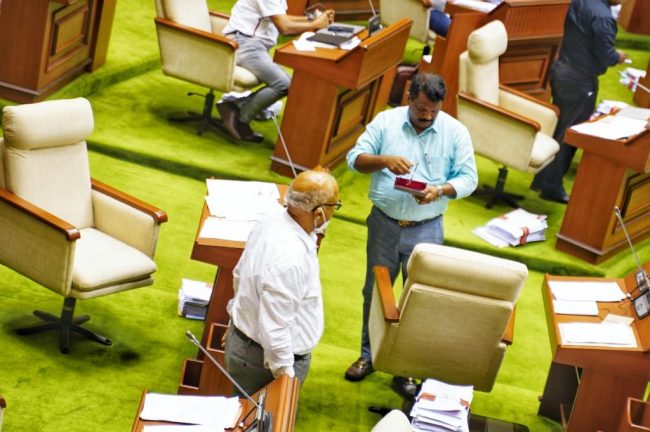 Goemkarponn desk
PORVORIM: Congress Calangute MLA Michael Lobo refuted rumours of him quitting his party and returning to the BJP.
“I am firmly with Congress, and I am not going anywhere; we will raise issues in the Assembly. I left yesterday’s Congress meeting due to some urgent work,” said Lobo.
He further said that he had already informed the party that he was not interested in continuing as Leader of Opposition as there were various issues raised against him by the government.
“I also suggested the party consider Senior leader Digambar Kamat or someone else to take the responsibility”, he added.
Lobo claimed that if he was joining the BJP, he would not have attended the party meeting in Margao based hotel.
Speaking in his meeting the Chief Minister Pramod Sawant, along with his wife Delilah Lobo, said that many houses were damaged in Siolim due to heavy rains and tree collapse.
The Congress yesterday dismissed Michael Lobo as the Leader of the Opposition in the Goa assembly for allegedly trying to engineer defections in cahoots with the ruling BJP.
At a press conference, AICC Goa in-charge Dinesh Gundu Rao said that a “conspiracy was hatched by some of our own leaders with the BJP” to weaken the party and “engineer defections”. “This conspiracy was led by two of our own leaders, LoP Michael Lobo and Digambar Kamat.”