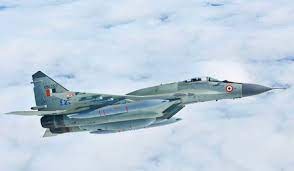 Goemkarponn desk
VASCO: A MiG-29K trainer crashed off Goa today after developing a technical malfunction.
A MiG 29K was on a routine sortie over the sea off Goa and developed a technical malfunction while returning to base.
“The Pilot ejected safely & has been recovered in a swift SAR op; the Pilot was reported to be in stable condition. BoI ordered to investigate the cause of the incident,” said Indian Navy.
The Navy currently operates the Russian-origin carrier INS Vikramaditya and expects to have the first Indigenous Aircraft Carrier (IAC-I) Vikrant operational by 2022.
With a second carrier to come in, the Navy is already evaluating a global tender for 57 carrier-based twin-engine fighter aircraft.
Last January, the naval Light Combat Aircraft (LCA) successfully completed arrested landing and take-off on board Vikramaditya and has since undertaken several trials.