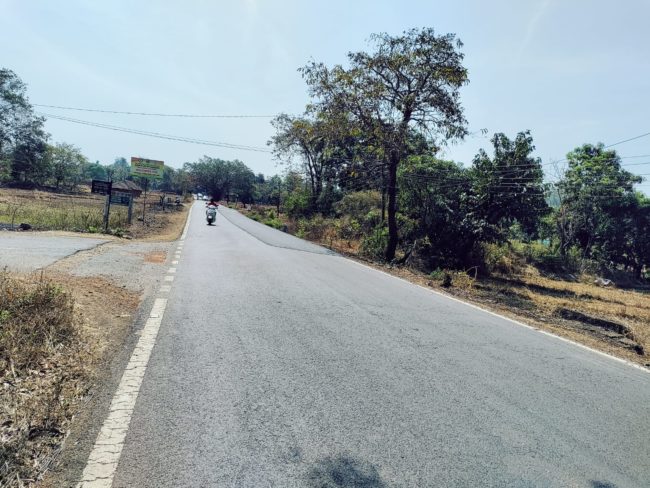 CANACONA – Stating Stating Mining Traffic has badly damaged the Polem-Margao NH-66 section, Congress leader Janardhan Bhandari informed two-layer repairs of this road would be carried out on this route. If required, even Mining Traffic would be stalled for a certain period to enable healthy surfacing of the road.
It may be recalled that following submission of memorandums to PWD higher-ups. Amidst threats, Rasta-roko, PWD, has repaired the badly mutilated NH-66 road from Gulem (Canacona) to Dramapur (Salcette) on Tuesday.
The repair works which were launched on Tuesday, however, had been carried out only in patches of only on the left side of the road towards Margao at ten different places(in Gulem up to the foot of Karmalghat), the most extended patch being of about 150 meters in length on the slope near Bhumipurush temple at Gulem. Later, on Wednesday evening, some more patchworks were carried out on the Karmalghat section.
‘PWD has been asked first to level the uneven road, which at different spots has massively sunk to a large extent. As part of the repair process, the road will be leveled first before taking up for actual Hot-Mix’, Informed Bhandari.
Bhandari further blamed the heavy vehicles, mostly vehicles transporting Mining from Karnataka into Goa, as major culprits for causing severe damage to the road. ‘If one observes, the road had sunk massively mostly on the left-side towards Margao. At some locations, especially on Karmalghat slope, the road has sunk as deep as one-feet down, making driving at these areas hazardous’.
Congress leader who is instrumental in spearheading the delayed repairs/Hot-mixing of Polem to Margao NH-66 section is on a two-day visit to Bangalore to attend a Congress Youth Padyatra along with Goa Pradesh Youth President Varad Mardolkar blamed the Ex-Canacona MLA and an Ex-minister in Canacona said ‘The work order was issued last October, but still PWD slept to the best reasons known to them and allowed the road to turn from Bad to Worst and to add this misery our MLA, and also an Ex-minister so-close to the ruling party’ looked the other way around and allowed the increasing misery on motorists to continue. The poor quality selling carried out last time has led to worst damages by heavily loaded vehicles especially mining trucks coming from Karnataka into Goa.
‘Once the Hot-mixing works are completed, we may have to keep the mining traffic from Karnataka shutdown on this route to avoid immediate damages.’
He is keeping a close watch on the road repairs works started informed the repair works had resumed late on Wednesday afternoon and have carried out more patch works to level the uneven road on the Karmalghat section. The repair works are also continued on Thursday.
This time we are not going to allow lip- services while repairing the not only badly damaged but almost turned NH-66 a mutilated road in Goa.’-END

Goemkarponn desk PONDA: In the run-up to the 2022 Assembly Election, politicians started a door-to-door campaign but failed to understand their problems. When asked to ... Read More

COVID19 protocols back on Dabolim airport

Goemkarponn desk VASCO: Dabolim airport director declares that the face mask, hand sanitization and all the Covid19 safety measures will have to be followed by ... Read More

Khaunte questions CM on how he plans to bring down mortalities

Porvorim MLA Rohan Khaunte has questioned the CM Dr Pramod Sawant over his statement of binging down morality rate to zero asking what was his ... Read More