Not only rivers; hills too in Ponda taluka are vulnerable to climate change 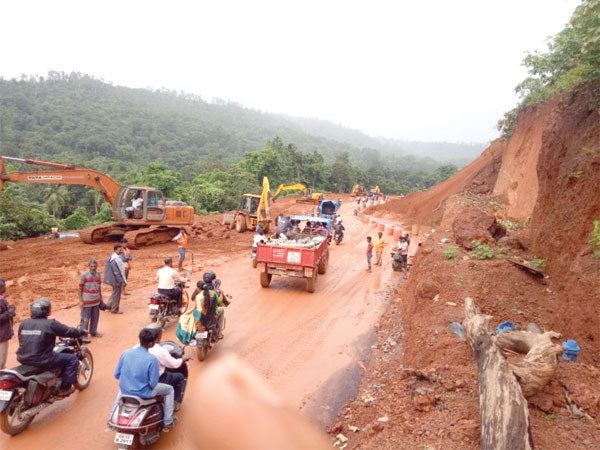 Goemkarponn desk
PONDA: On the backdrop of global warming and climate change, there has been a threat to climate change for various reasons.
Scientists have been continuously warnings on the subject.
It is understood that in recent heavy rain and flood, the Ganjem and OPA river tributaries of the Mhadei river flowing from Ponda taluka caused massive flooding on the river bank.
Around 16 houses on the river bank collapsed at Ganjem, while five were destroyed at Murdi and Savoiverem.
Hundreds of houses are partly damaged, and people have still not recovered and are homeless, worried about celebrating the Ganesh festival.
But now, according to locals and environmentalists in Ponda, not only these two rivers but hills too can prove dangerous.
The hills are being cut and chopped for national highway widening and also construction activities. If this continues, surely the hills in Ponda taluka would be vulnerable to climate change in the future.
The Government needs to conduct studies and take preventive measures as Ponda slowly turns into a concrete jungle.
Even in Sattre village of Sattari, there have been landslides in the recent rain. Ponda locals, too, felt that in the future, Ponda, Curti may be vulnerable to climate change if we didn’t save forest cover on hills and save them from chopping for construction activities.
Locals say there is a need to take measures to save houses existing on hills and not to permit in future constructions, hill chopping and cutting of trees on hills that are No Development Zones for the safety of all.
True to its name, Ponda City is popularly known as Fonya, which is derived from crater-like; its geographic location is like a vast crater and surrounded by hilly areas.
In the past many decades, the Khadpaband hill came up with several residential constructions. In case of climate change in future, the Khadpaband Ward in Ponda City is vulnerable to climate change, heavy rainfall or other geographic movements. Various places in Curti, besides other areas in Ponda Taluka, are susceptible to climate changes like heavy rainfall.
This is because most houses are situated at the top of the hill, and its slopes at Khadpaband and almost a dozen internal lanes lead to hills with homes located on slopes by the side of every road.
Though most lanes have a dead-end, one road passes over the mountain of Khadpaband road and goes down to Kavlem – Bandora Jurisdiction.
Viraj Sapre, a local social worker, said the Government needs to protect the hill and take measures to save houses on hill slopes and prevent any untoward incident in the future due to climate change.
Environmentalist Sandeep Parkar who is also felicitated for his work by Government, said he had filed at least a dozen complaints with deputy collector and TCP offices against hill cutting.
He said settlement on hills by chopping them and cutting trees makes the soil lose on and causes landslides.
He said there is one amendment in TCP Act a few years back wherein Government works for construction public crematoriums are permitted on a hilly area.
Parker cited how Deepnagar Hill has been levelled for crematorium land. Similarly, the mud of the chopped hill here was also used for Highway construction.
“Below the chopped hill, there is a residential area of migrants. Nobody can say Hills in Ponda are safe due to chopping and tree cutting. There have been agitations in the past at Priol and Curti to save hills. Similarly, while construction of NH at Kerya, vertical hill cutting led to major landslides, forcing the authorities to close NH for several days,” he says. He further says still the Kerya-Khandepar roadside is risky to locals.
Sandeep said recently in Sattari, there were landslides, and one reason was that many trees were chopped to plant cashew trees.
“The soil gets weak after chopping of trees roots of which firmly holds it.
Similarly, a massive hill has been cutting on Dhavlim Farmagudi road, making the entire hill vulnerable to climate change,” he says.
Sandeep said to protect Ponda from nature’s fury, we must protect the trees on hills and save them from hill cutting.