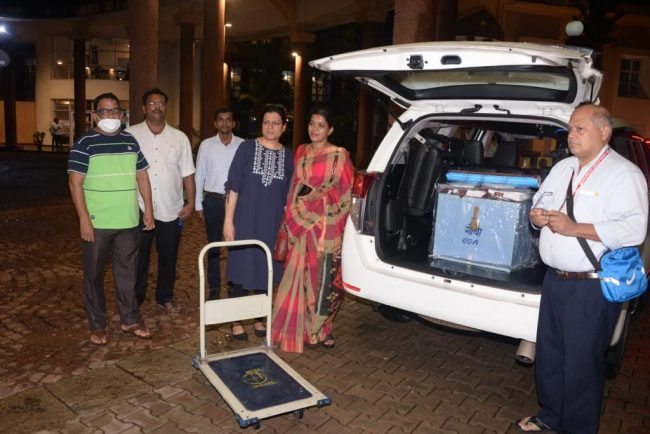 Goemkarponn desk
PORVORIM: The Ballot Box and other polling material for the President of India Election were brought to Goa by Joint Chief Election Officer, and Nodal Officer for Presidential Election, Smt Aisha Vaingankar and Asst Returning Officer, Shri Hercules Noronha for Goa State and was kept in strong Room at Goa Legislative Assembly Complex yesterday.
The term of office of Shri Ram Nath Kovind, President of India, is about to end on 24th July 2022.
The Election Commission is mandated to ensure that the election to the office of the President of India, which is the highest elective office in the country, must be a free and fair election, and the Commission is taking all necessary steps to discharge its constitutional responsibility.
The Election Commission of India yesterday distributed and dispatched designated ballot boxes, ballot papers, special pens, and other sealed election materials to the State Legislative Assembly Secretariats, including the National Capital Territory of Delhi and UT of Puducherry, for the conduct of the Presidential Election 2022 scheduled on July 18, 2022. This two-day exercise at Nirvachan Sadan, New Delhi, for dispatch of election materials to States/UT in a time-bound and secured manner is being undertaken under the supervision of Chief Election Commissioner Shri Rajiv Kumar and Election Commissioner Anup Chandra Pandey.
As per Article 54 of the Constitution of India, the President is elected by the members of the Electoral College, consisting of (I) elected members of both Houses of Parliament and (II) elected members of the Legislative Assemblies of all States, including National Capital Territory of Delhi and the Union Territory of Puducherry.
The Commission mandates the collection of the materials from the ECI Headquarters at Delhi by Assistant Returning Officers (AROs), including one senior officer from the office of the Chief Electoral Officer. Once they reach Delhi, officials are also assisted at the help desk at the Delhi Airport manned by the officials of the Election Commission of India, Civil Aviation, Delhi Police, and CISF. Ballot boxes along with other essential election materials are handed over to the AROs under appropriate security and safety measures after complete inspection at NirvachanSadan, New Delhi. Delhi Police teams escort the AROs while they come to collect the election material. The AROs return to their respective States/UTs on the same day on a collection of the election materials. During the transportation, the Ballot Boxes fly on a separate air ticket in the front row of the aircraft beside the seat of the officer transporting the materials under personal supervision.
While speaking to the AROs from the states, CEC Shri Rajiv Kumar emphasised that strict adherence to procedures by the ECI teams has become its hallmark in delivering error-free elections time and again. He added that a set of well-defined instructions and Standard Operating Procedures that are required to be followed thoroughly to complete every electoral process account for ECIâ€™s robustness for conducting elections. He asked the officials to be vigilant and ensure strict adherence to protocols and guidelines for transportation and storage of election materials, including ballot boxes and ballot papers.
Once the officers with ballot boxes reach the state capitals, these are stored in previously sanitised and properly sealed strong rooms under strict 4 Videography monitoring. Ballot papers for Presidential Election are also stored and sealed along with. After the poll is over, the polled and sealed Ballot boxes and other election material have to be transported back to the Office of Returning Officer, RajyaSabha Secretariat, by the next available flight. The boxes and other documents are carried personally in the aircraft cabins – never out of sight of accompanying officers. The Commission has already issued specific guidelines for the conduct of polls, and AROs and Observers are trained as such.
A workshop for the RO, AROs & CEOs was also organised on June 13, 2022, at Vigyan Bhawan to brief them on all aspects of election procedure for the conduct of Presidential elections. The Commission has also appointed 37 Observers to oversee the arrangements of polling and counting during elections, and a briefing meeting of these Observers was also organised on 11th July 2022.
The Observers are senior IAS Officers of the rank of Additional Secretary/Joint Secretary, Government of India. The Commission has deployed one Observer to oversee polling at each of the 30 places of the poll in the State/UT Legislative Assemblies and two observers for Parliament House.
The designated Observers will take stock of election arrangements made for security and transportation of ballot boxes and election material by the ROs and AROs and ensure free and fair elections. The Observers deputed at Parliament House will also oversee the counting process of votes on 21st July 2022.