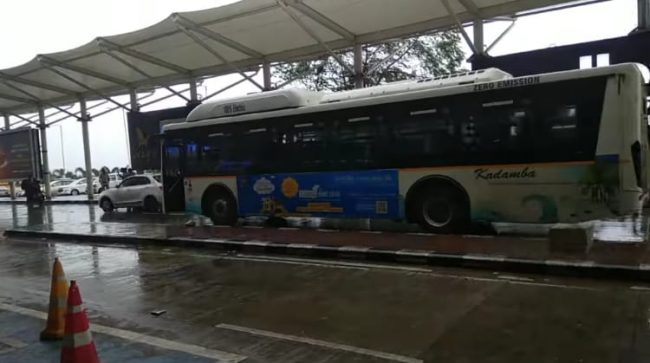 Goemkarponn desk
VASCO: Poor response to the Kadamba buses stationed at the International Airport Dabolim. Tourists prefer cabs and taxis over the public transport service at Dabolim airport.
A few months back, the state government decided to make public transport service available at the Dabolim International Airport so that some low-end or individual tourists could take up a pocket-friendly mode of public transport to roam around Goa. But surprisingly, the K.T.C. buses stationed at the Airport are receiving lukewarm responses despite their reasonably fair prices.
Suraj Naik posted on a social media platform highlighting this issue. He said, “These expensive Kadamba Electric buses are sent at Airport, but tourists don’t prefer to go in these buses due to which these buses come and go empty from Airport to Bus Stands and on allocated locations. This is a complete waste of taxpayers’ money to maintain and run such kind of bus services where it is not required.
He further wrote, “requesting Goa Government to please look into this matter and stop wastage of taxpayers money on such things. Also allocate the buses where it is actually needed”.
When contacted, Gurudas Parab, president of the Tourist taxi operators association, said that there are an ample number of taxis available at the Dabolim airport. Most of the tourists take these taxis and cabs at the Airport. But now we cannot say anything about K.T.C. buses stationed at the Airport as the government tends to do as per its will.
Parab said it is up to the tourists which mode of transport to choose. Few individual tourists indeed take up these K.T.C. buses.
Prasad Prabhugaonkar of Yellow Black Taxi Union also said that fewer tourists are using K.T.C. bus services at the Dabolim airport.
He said that some tourists who come individually or think economically take up public transport services to save money. It is an individual choice. Prabhugaonkar also said that the K.T.C. bus service at the airport doesn’t affect them much.
Meanwhile, when contacted S.V.T. Dhananjay Rao, Dabolim airport director, about this matter, said that the K.T.C. buses are stationed at the Dabolim International Airport to provide transportation options to all types of tourists who come to Goa. The main objective here is to provide tourists multimodal transportation at the Dabolim airport. This will help in tourism and transport connectivity. This will also help to encourage more tourists footfall,’ he added.