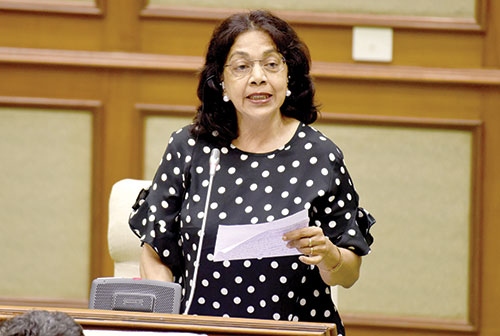 Goemkarponn desk
CORTALIM:  Aam Aadmi Party (AAP) leader and former Cortalim MLA Alina Saldhana took potshots at the Panchayat Minister Mauvin Godinho and Sancoale Sarpanch Girish Pillai for failing to bring about developmental in the Cortalim constituency. Saldhana mocked Pillai, claiming that he only knows to organize beauty contests and not do real works that people need the most.
Saldhana assured to give housing facility to the Zuarinagar residents if AAP forms government in Goa.
When questioned about the allegations against her about her constituency remaining underdeveloped, Alina said she wants to say anything but laugh because the people who are making such statements are liars.
“The works which I have done in my constituency are for everyone to see,” she said.
Taking a potshot on former Cortalim MLA and the present Panchayat minister Mauvin Godinho, Alina challenged Godinho to show a single completed work in the Cortalim constituency, which he has done during his 20 years span as an MLA.
She also blamed Godinho for turning the Kala Bhavan project at Upasnagar into a white elephant and claimed that she pursued the incomplete work of this ongoing project.
Saldhana further revealed that she was initially hesitant to take up Kala Bhavan work since the project had no parent department, and it took a year and more to find the parent department.
Commenting on the Sancoale sarpanch Girish Pillai, she mocked him for not knowing the meaning of development.
“He as a sarpanch has not done anything essential he could have done is the panchayat ghar project. He was a sarpanch for three long years, unable to bring the project, and only managed to lay the foundation stone. Currently, the panchayat office was shifted to two flats along the roadside, which causes traffic congestion,” she says.
Saldhana further commented that the Sancoale Sarpanch knows only to hold beauty contests like Miss Cortalim and Mr Cortalim.
The inauguration of drains which Pillai is doing, is actually pursued by former Sarpanch Ramakant Borkar. Pillai is just like his mentor (Godinho), who has failed to bring development in Cortalim constituency during his tenure, she says.
She said that people support her and are thankful to her for undertaking various works.
Saldhana said that since she is now with the AAP, her main motto will be to give proper decent housing to the Zuarinagar residents once AAP forms the govt in Goa.
Meanwhile, Maria Souza, Sarpanch of Quelossim panchayat, said that not much development in her panchayat area has been taken place, and the ongoing work is related to the hot mixing of the road from the village, which is happening due to the follow up done by the former Cortalim constituency MLA Alina Saldhana.