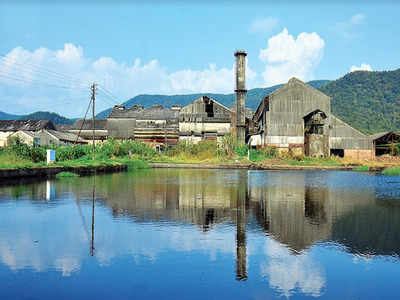 Goemkarponn desk
USGAO: Sanjeevani Sugar Factory workers complain about not getting a salary for two months and appealed to Chief Minister Dr Pramod Sawant to solve their pending issue before the Ganesh festival.
They Requested Govt to release pending salary, pending Arrears of last Sugar Wage Board & “Ex-Gratia” of 2020-2021 before Ganesh Chaturthi Festival.
The workers said the present Administrator harass workers.
The workers requested the Chief Minister and Agriculture Minister to look into Sanjivani confirmed workers issues as early as possible because most of the confirmed workers are entirely dependent on monthly salary.
They said they have not got a salary of two months and are forced to borrow money from friends and relatives.
Due to non-payment of salary, most of the worker’s loan EMIs are also pending & received letters from the bank for pending loans.
“To date, all the Government & Government-appointed administrators had given Sanjivani confirmed workers Salary, Ex-Gratia & other facilities on Time; however, the present Administrator is harassing Sanjivani staff and behaving like Sanjivani Sugar Factory is his own property,” workers complained.
Workers say the present Administrator has Only farming knowledge; he doesn’t know industrial rules and how to draft workers related letters giving incomplete information and files return from Agriculture Department.
The previous Administrator released “Ex-Gratia” to Sanjivani confirm staff eight days before Ganesh Chaturthi Festival, but the present Administrator is not following the “Ex-Gratia” file, “Arrears” file & Salary file which is sanctioned by Finance Dept On 12th August..
Local MLA and PWD Minister Deepak Pauskar always support the Sanjivani Workers; he personally came with workers & discuss our issues with Agriculture Minister Babu Kavlekar.
They said that Kavlekar promised the Sanjivani to confirm that the government will definitely pass both the demands.
“He said that instructions are given to Agriculture Director & Sanjivani Administrator to forward the worker’s related files to his Office on 18th August 2021 without any queries. Still, files have not moved as the worker’s Committee checked the status of the file in Agriculture Dept. on 27th August 2021,” they said.
The confirmed employees had taken the gate meeting & decided to go for Pen Down & Tool Down Strike from 1st September 2021.