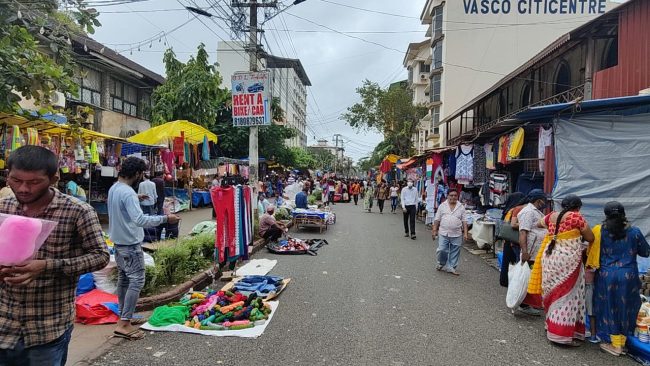 Goemkarponn desk
VASCO: The Damodar Saptah Festival is long over, but the stalls at the Fair in the city continue to be patronised by the people
However, several of the around 600 odd stalls selling different items ranging from clothes, toys, sweets, decorative items etc. seem to be hit by a business slag this year-round and many of the owners of these temporary makeshift stalls have on Monday requested for an extended period to the Mormugao Municipal Council (MMC).
The MMC led by Chairperson Leo Rodrigues, however has maintained that the stalls will be dismantled and the roadside footpaths cleared, lastest by the 10th of August
The MMC had been very keen to have a Saptah fair this year for 7 days after the Temple committee announced that the Saptah festival will be celebrated on a grand scale after a gap of two years amidst the Covid Pandemic
Sources added that MMC had made markings to accomplish as many as 1000 stalls for the fair, but only 600 odd stalls finally made it for the Saptah Fair, which is one of the most anticipated festivals in Vasco
A stall owner Ali Mohammad Hassan said that while they had expected huge profits, the business was not up to the mark
“We understand that the fair is allowed for seven days, but the business has not happened as expected, and we have not even been able to recover our costs. Anticipating a good business, we also brought in more people to work at the stalls, and our costs went up. We have to recover our costs, and we hope the MMC will give us a few day’s extension on humanitarian grounds,” said Hassan.
Another stall owner Dayaram Kevat said that the business was slow during the entire week except for a slight rise on weekends
“We don’t want to complain, and the Damodar Saptah has never incurred losses to any of us all these years. We have been working hard every day for business which has not happened as expected. There was good business only on the weekend, and We appeal to the MMC to give us an extension till the next weekend till Sunday so that we can make a considerable profit for the efforts we have put in the stalls,” said Kevat.
Another stall owner Rahimulla Khan said that while there was a rush to the fair, the people had been hit by the pandemic and not in a mindset to buy at the Fair
“We had hoped that the fair conducted after a gap of two years would reap huge profits, but we neglected the fact that the people have been affected by the pandemic and many of them don’t wish to buy because many are probably on half salaries. We are yet to make profits, and we request MMC for an extension,” said Khan.
Meanwhile, MMC Chairperson Leo Rodrigues said that the stalls could not get an extension and would be dismantled by Wednesday
“We cannot give an extension because we have certain limitations and must follow certain orders. We have made all the arrangements for the stalls, and we did not hike the rates for these stalls to encourage them. We have kept the same rates prevalent two years ago considering the pandemic, and while we understand their situation, we cannot do anything for them beyond a certain point. We will open the Swatantra path on Tuesday for motorists, and the stalls must vacate by Wednesday. We also have panchayat elections, and the police deployed at the Saptah Festival will soon move out of there and be posted for Election duty. We had already been very clear that the stalls will be permitted for seven days only and will engage municipal workers to dismantle the stalls on Wednesday, which is the end of the seven days of the fair. We request the stall owners to cooperate with the MMC staff,” said Rodrigues.