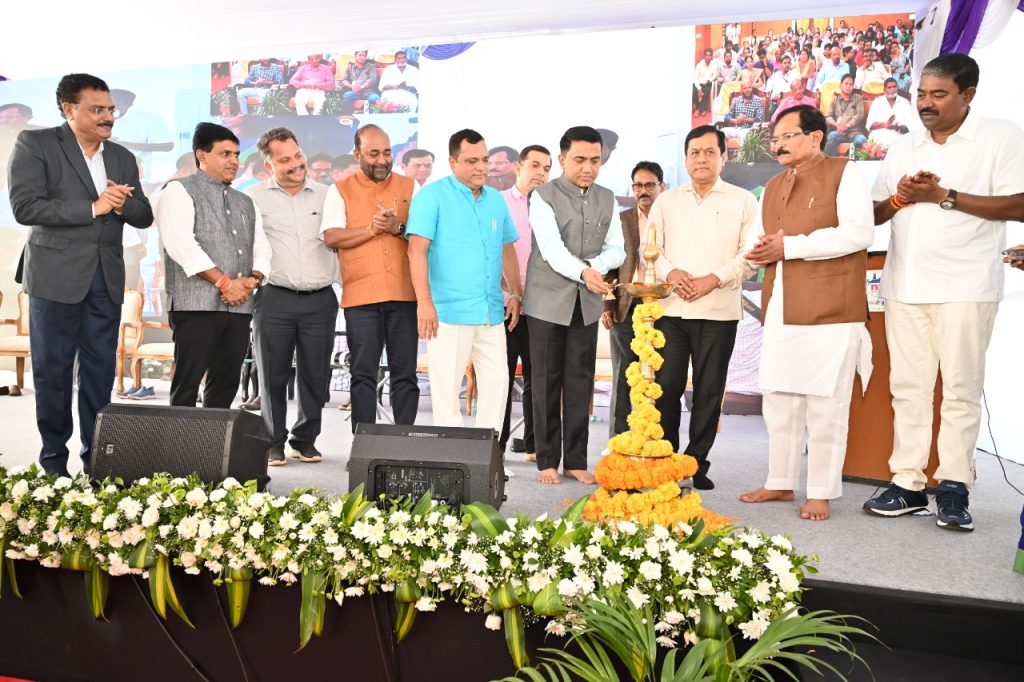 MORMUGAO: Mormugao Port Authority (MPA) laid the foundation stone for the development of world class International and Domestic Cruise Terminals at the hands of Sarbananda Sonowal, Union Minister of Ports, Shipping & Waterways and Ayush Govt. of India and Dr. Pramod Sawant, Chief Minister of Goa, along with Shripad Y. Naik, Minister of State for PSW & Tourism, Govt. of

The project is funded jointly by Ministry of Tourism, Government of India under the scheme for Tourism Infrastructure Development and by Ministry of Ports, Shipping & Waterways under Sagarmala scheme which will act as a gateway to Goa. Another Rs.21 Cr. will be invested by Private operator for Operation & Maintenance of Terminal on PPP Mode.

The captioned project will be developed on the area admeasuring 13.4 acres of land close to existing Break Water berth (Cruise Berth) by providing additional berthing facilities to Domestic cruises on Buffer berth and Berth no 3.

The project also involves facility for RO-RO, Ro-PAX and Ferry Services which is unique in nature to benefit both, International and Domestic Cruise Passengers to Crossover to North Goa and other tourist destinations using transportation through waterways. The total Project cost is Rs.101.72 Cr for Development of terminal.

MPA also announced the plan for construction of Up ramp to Fly over at Port railway Baina for facilitating the movement of cargo from storage yards at the estimated cost of Rs.26.13 Cr, with the financial assistance from Ministry of PSW under Sagarmala scheme.

The Chairperson, MPA & NMPA Dr Venkata Ramana Akkaraju addressing all gathered, he said that under the sagarmala & gati shakti initiative of of Govt. of India a major upgradation of all the ports & waterways across india & specifically Mormugao Port. This will increase the cargo handling capacity & also boost Tourism industry. He said the international Cruise terminal will add to Goan economy & generate employment opportunities.

Dr. Pramod Sawant, Chief Minister of Goa, addressing the enthusiastic crowd said that this international Cruise terminal on its completion will be able to hand exponentially higher volumn of cruise & cargo vessels and generate thousands on employment opportunities.

He agreed that after a halt in mining activities there was a downturn in traffic at the Port but he assured that there will be real growth in import exports through Mormugao port Authority which won’t be depending on the mining. He also congratulated the New Mangalore port Authority for launch of various infra projects that were launched virtually today.

He also assured that Dabolim Airport will continue to run simultaneously with upcoming Mopa Airport. This was greeted with thunderous applause from the crowd. He further highlighted that with a well running Dabolim Airport & Mormugao Port Authority there will be tremendous growth of Mormugao Taluka in the coming years.

Sarbananda Sonowal, Union Minister of Ports, Shipping & Waterways and Ayush Govt. of India addressing the people gathered that under able leadership & vision of PM Narendra Modiji and with Sagarmala & Gati Shakti Initiative there will be modernization, digitization & upgradation of All ports and waterways in India. The International cruise terminal which is a milestone project for MPA will help in transforming the infrastructure & waterways of Goa. He said Goa is one of the most pristine & beautiful states in Goa.