AK FIRES at RANE: What has Rane done in LAST 50 YEARS? 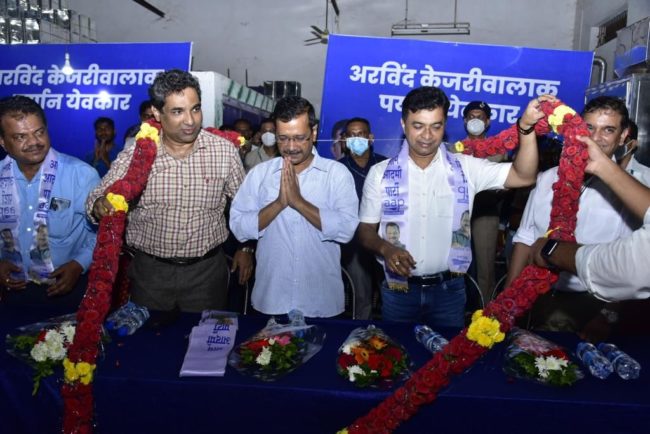 AAP National Convenor and Delhi CM Arvind Kejriwal said he questioned one of the seniormost leaders of Goa Pratapsing Rane “what he has done in the constituency for last 50 years?
Kejriwal said, “We have to work hard to make Goa of our dreams. I am a common man, and I am no politician. I only know to work. I know how difficult it is for a common man to earn a livelihood, educate their children”.
He said ten years ago, there were only two parties in Delhi, BJP and Congress.
“They have a setting like they have in Goa. They were working for themselves only,” he stated.
He added, “Your MLA from Poriem has been there for the last 50 years; what he has done? Even he was CM for 15 years. I would like to tell you how Delhi’s people thrown out BJP and Congress; they showed faith in AAP”, Kejriwal said.
“From the last seven years AAP government has changed education set up; government schools are performing better than Private Schools. Earlier, Delhi has high electricity bills and high power cuts, we have changed it. Now Delhi gets 24×7 free electricity and 200 units free consumption every month. We have given 10 lakhs Job in Delhi, and we have announced the same in Goa. Recently, one union minister from Delhi came to Goa and said that Kejriwal is giving free; I would like to ask him when MLA’s and MP’s can get free electricity, why can’t common people get 300 units free?” questioned Kejriwal.
AAP leader Adv Ganpat Gaonkar said,” The highest poverty in the state is in Sattari taluka. People’s monthly income is spent on electricity bills, water bills, gas bills and other bills. In Delhi, the Kejriwal government has provided free electricity and water. If people want this kind of facility in Goa too and want a corruption-free government, then AAP is the only option”.
AAP leader Mahadev Naik said, “Nobody can deny that when we were battling the second covid wave, only AAP was there to help us. They provided rations, Oxygen Concentrators and a lot of things. We have seen the kind of work the government has been doing for a decade; they have ruined the state. The state needs a change, and only Kejriwal government can bring that change”.
Vishwajeet Krishnarao Rane, a senior BJP leader, joined Aam Aadmi Party in Arvind Kejriwal, AAP national convenor and convenor Delhi CM and promises change in the Poriem constituency within six months once AAP comes to power.
While addressing people on the rainy night,  Rane said, “Kejriwal is a man of the words. Many leaders in Delhi tried to get Kejriwal out of Delhi politics, but they failed to do so. He was elected by the people of Delhi for the kind of developmental work he did in his five-year tenure as CM in the first term”.
“The MLA of Poriem constituency has been the Chief Minister for 15 years, and he is the one who served as Chief Minister of Goa for the most. Despite this, he had
not undertaken any development work in so many years. However, with the election looming, both he and his son, an MLA from Valpoi, have promised jobs. Are jobs created three months before the election?
And that too they provide Multitasking jobs and security jobs”, he added.
“To date, neither father nor son has succeeded in bringing MNCs to Sattari, but Kejriwal is known for his vision. If we bring four MNCs in the Sattari region, and each company offers four thousand jobs, then 16 thousand people will be employed. If MNCs pay them around 25k, then Nobody will take on security jobs or multitasking jobs”.
“My motivation for joining the BJP then was Manohar Parrikar’s vision. Since the current government has lost that vision, I feel Arvind Kejriwal’s vision alone can transform Goa. Therefore, I have decided to join AAP”, he added.
Viswajeet Rane worked for the BJP for a decade and was one of its active senior leaders. He contested from Poriem against Pratap Singh Rane in the 2017 assembly elections.

Goemkarponn desk PANAJI: Following the red alert issued in the State by IMD, Goa was lashed by heavy rains in last couple of days and ... Read More

Lobo opposes proposal to include Ella, Old Goa into GPPDA; says it will be scrapped

NEWER POSTFor Whom Was the gun meant for questions Rohan Khaunte
OLDER POSTIf casinos decisions can happen in a day, why delay the decision on schools?