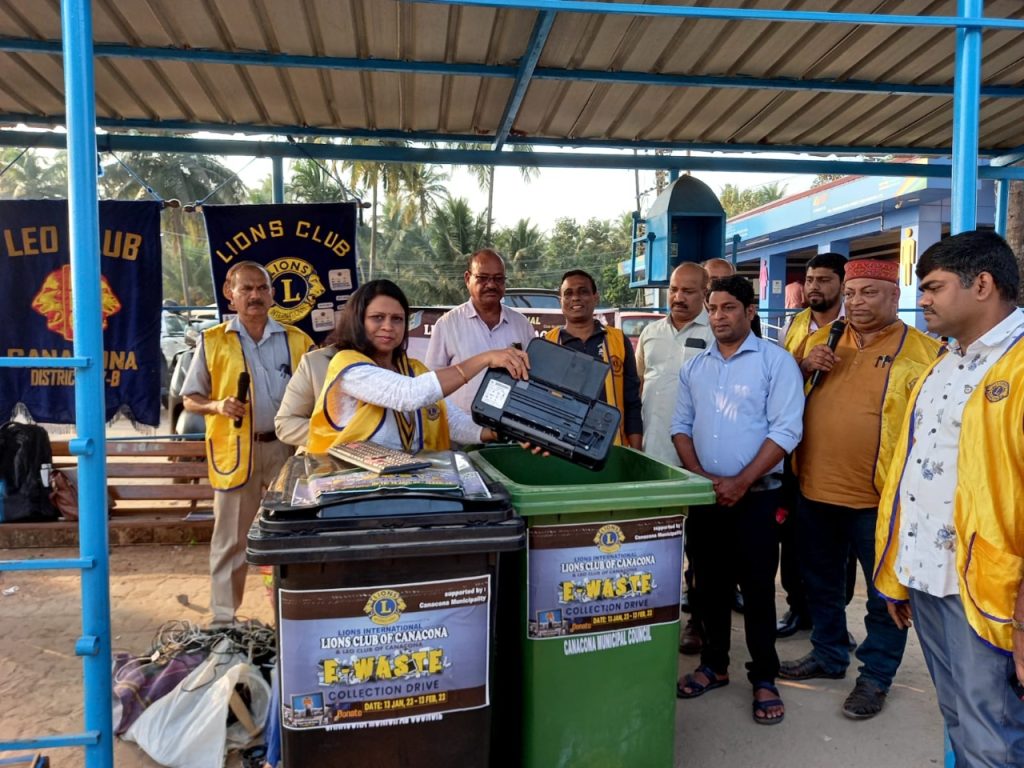 CANACONA: Canacona Lions launches the world’s biggest e-waste Collection Drive Campaign supported by Canacona Municipal Council at Palolem beach.
The e-waste Collection is to continue till 13th Feb ’23.
Appealing to dump and donate, Ex-CMC Chairperson and Councillor (Palolemward) Simon Rebello inaugurated the e-waste collection drive campaign at the Palolem Beach Main gate campus in the presence of Lions International 317B District governor Suggala Yelamali.
The e-waste material was donated by all the Lion members and the local people, especially worn-out or non-working electronic gadgets and their parts were deposited in the municipality-provided collection bins.
Lions Club of Canacona and Leo Club of Canacona inaugurated the world’s biggest e-drive campaign at Palolem Beach Main Gate campus at the hands of Shri Simon Rebello, councillor of Palolem Municipal Council, Chief guest DG Saggala Yelamali and in the presence of Lion Adrian Torres District Coordinator of Lions e-waste campaign, CMC Dy. Chairperson Laxuman Pagi,
Lions Ulhas Faldesai, Valerian Viegas, Swapnil Naik, Pawan Rangnekar, Gourish Vernekar, Leo Ajit Singh, were present.
Earlier, Lions Club of Canacona President Yogita Vernekar welcomed and presented the e-waste banners and posters to be used for the campaign. While Rebello focused on the need for a systematic collection of e-waste being dumped by the people, Lions District Governor Yellamali spoke on lions International (India) taking up the challenge of re-cycling of e-waste, stating there is 347 Mt of unrecycled e-waste on earth in 2023 and further said China, US and India produce the most e-waste. Lions District 317B Lions E-Waste campaign Coordinator Adrian Torres, Zone-I Coordinator Joaquim Gonsalves and Zone–II Coordinator Rahul Vernekar also spoke.
Meanwhile, the Lions Club of Canacona joined in the service programme of ‘Swatchata Padyatra’ organised by a Social club from Karwar Karnataka viz. Pahare Vedike.
The Karwar club had invited the Lions Club of Canacona, and along with the Lions Club of Sadashivgad and other local Clubs and Mahila Mandal members, to participate in the Swatchata Padyatra.
On their way, members carried cleanliness of the roadside, fields, and grounds up to the Goa border at Pollen area. In the function that followed, Canacona lions Vice-President Gourish Vernekar was felicitated for his tremendous work in the field of literature and social service.
Club President Lion Yogita Vernekar was appreciated with a token of love (Ashoka plant).