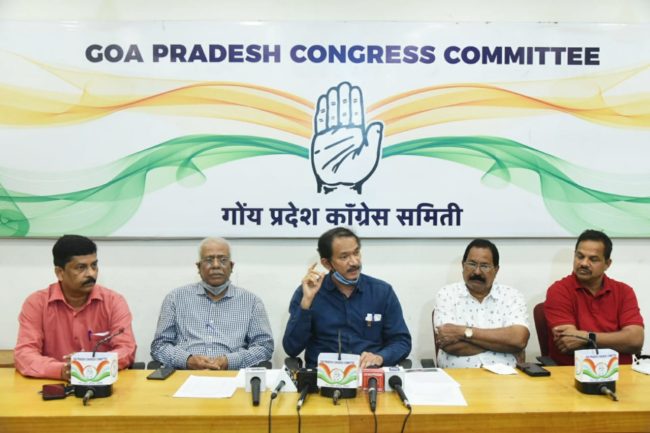 “Sawant is involved in a 1686 crores rupees mining scam. We will expose this during Amit Shah’s visit to Goa. Besides this, we will also expose why he shielded Milind Naik in sex scandal case and corruption he did during COVID.” Chodankar vociferously said.

“We have not given tickets to defectors and have given around 80 per cent new and young faces on demand to the people of Goa.” He said.

“We had promised to the people of Goa that we will not support the defectors directly or indirectly, and that we have fulfilled.” Chodankar said.

He said that 30 candidates are new faces and around 18 are facing the assembly election for the first time. “Popular demand of people is getting fulfilled. We have kept our word and have given young faces. We have given representation to women, all caste and religion while choosing for candidature.” Chodankar stated.

“I am optimistic that people of Goa will give blessings to these candidates and will elect them to represent their respective constituencies.” He said.

He charged that Chief Minister Dr. Pramod Sawant has conceded the defeat and hence he is trying to create hindrance before our candidates. “Sawant is afraid of our candidate Dharmesh Saglani from Sanquelim and hence filing an unwanted FIR against him by misusing power. He has already filed two FIRs against him and more may be on the way. If he has guts let him file more FIRs and send him behind bars. But still Dharmesh Saglani will win the Sanquelim seat.” He said.

He said that Chief Minister Sawant gave clean chit in Sex Scandal case, though all evidences were there against him. “People of Goa will decide about this and we will also approach court.” He said.

He said that the BJP government failed to take action against extortion charges against Dayanand Sopte and vulgar video made viral by deputy chief minister Chandrakant Kavalekar. “BJP government is trying to create hurdles in front of Sankalp Amonkar, Dharmesh Saglani and others. But we are not afraid. Our candidates will win as people have decided to reject BJP candidates.” He said.

He said that BJP candidates from Sanquelim have lost all local body elections and thus it is clear that Pramod Sawant will get defeated.

He has warned government officials not to fall prey to the unwanted orders of BJP leaders. “we will take action against these officers once we form a government.” He said.

Ravi says his priority is third district at Ponda

Goemkarponn desk PONDA: Ponda BJP candidate Ravi Naik said that if BJP is voted to power, he will make Ponda a third district which is ... Read More

NEWER POSTSETBACK to TMC: Luizinho withdraws, Seoula Vaz to contest from Fatorda
OLDER POSTIssue-based support to BJP was for development of constituency: Churchill