Congress is right platform to fulfill aspirations, people have realized it: Chodankar 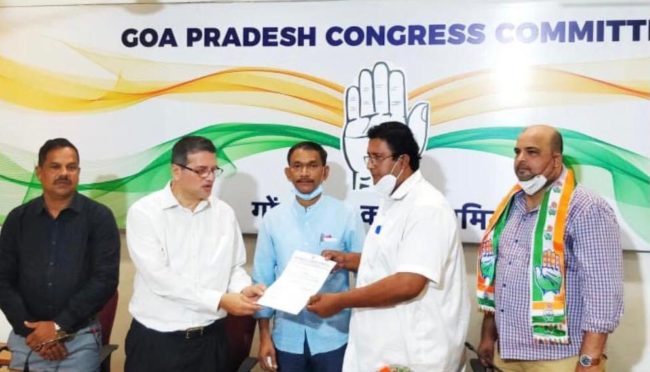 PANAJI: As a part of ongoing Digital Membership enrolling Mr. Tanvir Khatib in Congress, The GPCC President Girish Chodankar said that people have realized that only Congress can take everyone together and hence party is getting positive response from digital membership drive.

Chodankar said that their former supporters have started to join Congress again looking to hope that only this party can steer the State properly. “People have started reposing the trust in Congress as we have become the voice of the problems faced by Goa. Many more will join Congress in the coming days.” He said.

Yatish Naik said that people are joining Congress and taking its ideology ahead, to take the nation and Goa in the right direction. “we all working as team members to achieve our goals.” He said.

“Present government at center and in Goa have created a mess in administration and also in the economical area. To make these areas stable, we need to hobnob the ‘lighthouse ideology’ of Congress and people have realised this. This will take us to the better Goa and nation.” He said.

Mr Tulio de Souza, spokesman congratulated them for strengthening the secular forces under the Congress banner, he also said that the people of Goa are fed up with the current dispensation which was initially propped up by the Goa Forward party and are looking up to a Congress government in the near future to meet the aspirations of the common man, who today has been forced to come on the roads to agitate for their just demands

Adv Tanveer Khatib said that his roots belong to Congress Party, and he feels good after rejoining. “ Only Congress can bring the aspiration of people in reality. Now it’s time to send BJP home.” He said.

He further said that the Congress has empowered the people of the country and the state with innovative acts like the RTI to empowering young and future under Right of Education to employment to rural sector under MNERGA to various other acts covering and satisfying every section including youth and women setting new trends in governance and development. The governance and rule under the BJP govts in the centre and state has been sidelined and weakened with frivolous and unwanted politics of dividing people’. People have started realising this folly specially the youth and the women who now are looking towards the Congress party for a brighter future and a better Country.

He further reteirated that under the present leadership in the state we will have more of youth and young women joining us and will bring back the party to power in the state.

While replying to question from media, Clarifying about his adieus to Goa Forward Party, Khatib said that they garnered votes on Goem, Goemkar and Goemkarponn. “But they betrayed Goans by joining hands with BJP.” He said.