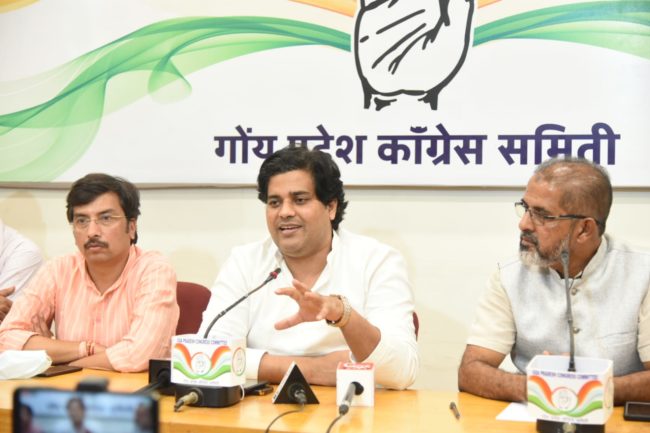 PANAJI: The Chairman of AICC Minority Department Imran Pratapgarhi on Sunday promised the minority community of Goa to constitute ‘Minority Commission’ in Goa to address several pending issues and to work in the interest of the community, if Congress comes into power.

Pratapgarhi on Sunday addressed a press conference in Panaji and said that after meeting many people from minorities in Goa, he observed that BJP failed to resolve many issues.

GPCC Minority Department Chairman Nazir Khan and others were present on the occasion.

Imran Pratapgarhi said that Minority commission is the need of the hour. “I promise we will constitute it once our government comes into power. Even Kabrastan issues are pending. We need to address these issues.”He said.

He said that Goa’s environment is loved by people across Goa. “But BJP government is trying to set up a Coal Hub in Goa. By bringing coal in Goa, BJP will spoil the environment. We need to stop these anti-people policies of the BJP.” He said.

People are angry with BJP as they failed to provide jobs and resolve other issues. “BJP knows that people will vote Congress as it has failed in all areas. Hence to split votes of Congress, BJP has brought TMC and AAP in Goa.” He Charged.

Nazir Khan said that BJP leader Urfan Mulla has sidelined all the issues faced by minorities. “He is trying to save himself by working for BJP and doing nothing for the welfare of minorities.” Khan charged.

Meanwhile, Imran Pratapgarhi also met the agitators at the Old Goa Heritage Site who are protesting against the illegal structure and assured them to provide with legal aid if required.

Panaji:‘Tika Utsav'- that marks the beginning of the second big war on COVID-19 as said by the Prime Minister Narendra Modi, in Goa saw a ... Read More

NEWER POSTAAP has proven that elections can be fought and won with honesty: Arvind Kejriwal
OLDER POSTPrasad Gaonkar resigns as MLA; to join Congress