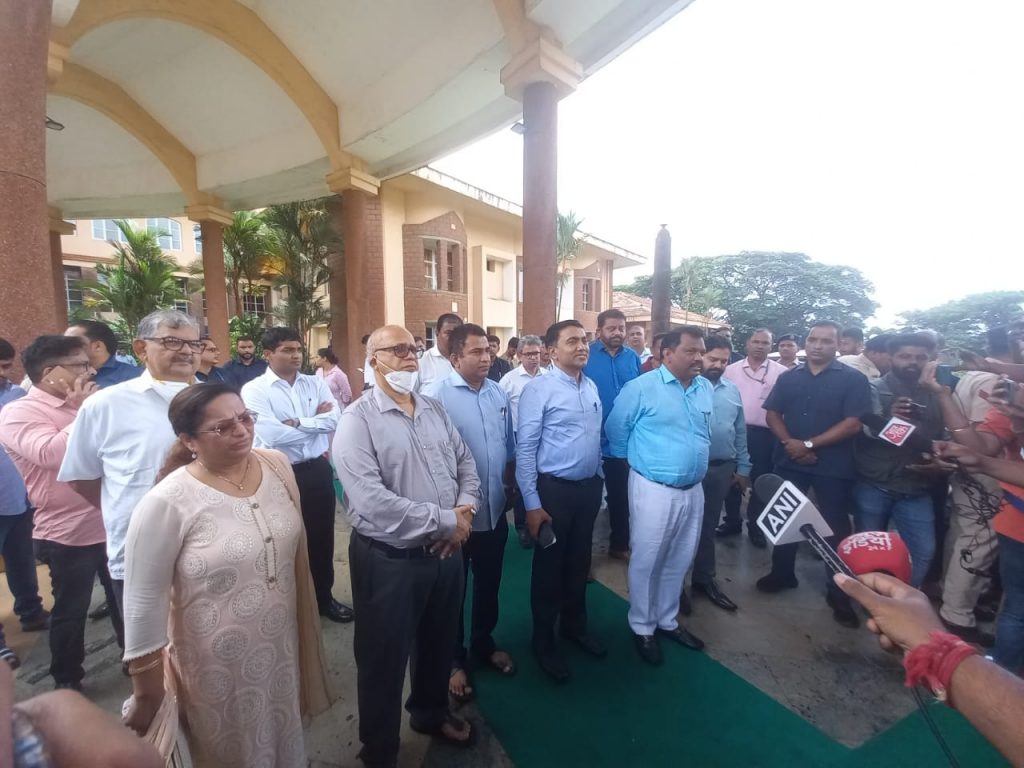 Goemkarponn Desk
PANAJI: Eight Congress MLAs, including former CM Digambar Kamat and leader of the opposition Michael Lobo, have joined the BJP today in Goa in the presence of Chief Minister Dr Pramod Sawant.
With the shift of eight MLAs, Congress has reduced to three MLAs in the state. BJP, which has 20 MLAs out of 25 MLAs of NDA, has improved its number.
The MLAs who joined the saffron party include Digambar Kamat, Michael Lobo, Delilah Lobo, Rajesh Phaldesai, Kedar Naik, Sankalp Amonkar, Aleixo Sequeira and Rudolf Fernandes. They also met with CM Pramod Sawant before joining the party.
Earlier in the day, Leader of Opposition (technically) Lobo had a crucial meeting with the members of the Congress Legislature Party and resolved to merge with BJP.
Former Congress MLA Michael Lobo said, “We have joined the BJP to strengthen the hands of PM Modi and CM Pramod Sawant. We have begun a campaign that is Congress Chhodo and BJP Jodo.”
Margao MLA Digambar Kamat, after joining the BJP, said that an individual takes a decision as per the prevailing situation.
He said that Congress is in bad condition and all senior leaders have deserted them, and former Minister Ghulam Nabi Azad has made this clear in his resignation letter.
“India is becoming a superpower, and people of India are now seen with respect after Modi becoming Prime Minister,” he said.
Kamat said that the people of his constituency were after him as nothing was happening in the Congress party, which is why they decided to join the BJP.
Chief Minister Pramod Sawant thanked Michael Lobo and Digambar Kamat, all other MLAs, for joining the BJP.
“Today, BJP’s hands are strengthened, and we can take Goa forward on the path of development,” he said.
With eight MLAs breaking away as a group that is two-thirds of the party strength, they can avoid disqualification under the anti-defection law.
A Congress ally, Goa Forward Party chief Vijai Sardesai reacted with scorn, saying the defecting MLAs are “symbols of pure evil” who are pursuing “greed for wealth and hunger for power… in defiance of Almighty God”.
Digambar Kamat and Michael Lobo were at the centre of the switchover speculation in July too, and the Congress had even asked the speaker to disqualify them under the anti-defection law. The party removed Michael Lobo as Leader of Opposition, but no replacement was named.
In the 40-member Goa Assembly, the Congress had 11 legislators, and the BJP had 20. In a similar move in July 2019, 10 Congress MLAs switched over to the BJP.