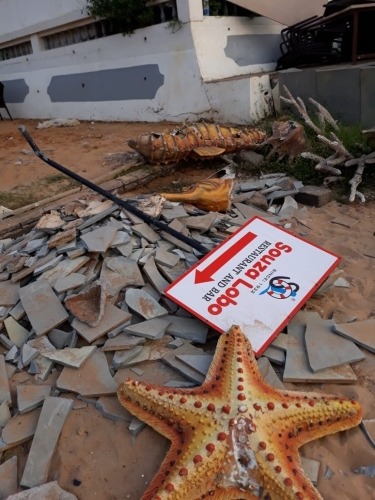 CALANGUTE: There is no denying that the Delhi businessman and Delhi tourists are facing a lot of hatred in North Goa because a few are acting arrogantly using their clout against the local Goans.
The locals in North Goa say that the Delhi businessman and tourists are involved in assault and land grabbing in many coastal areas, and the Police act as if nothing has happened and instead file cases against the locals.
Sousa Lobo restaurant is a fitting example of the domination by the Delhi businessman in Goa.
The restaurant had been ransacked by the Delhi businessman’s goons, and only because of the media and social media pressure the accused were arrested.
“Right, from the first incident, the Police have not been doing the investigation thoroughly, and every time we went to them and questioned them about the status of the first attack, which was more than a year ago, they said the investigation is going on. But to my knowledge, they have not been investigating,” said Jude Lobo, owner of Sousa Lobo.
He said that every time he goes to them, Police say pressure is coming from the top.
“We want to know where is the pressure coming from?
Why so much pressure? Is there any IPS officer or local politician? We need to know,” he said in an interview with Goemkarponn.
Not just do they bribe local politicians, but they also use their clout in Goa Police.
“In the smallest of cases, the officers of the level of DGP, IGP and SPs get involved because the Delhi businessman has a connection with the officers, and they come from AGMUT cadre, who are mostly Delhiites,” said a social activist, who did not want to be named.
Giving an example, he said there was a case on Monday wherein a Delhi tourist group thrashed a pay parking worker and his friends, including a 14-year-old minor, over a petty issue of parking charges.
Videos show them constantly shouting, “we will call DGP, North Goa SP Shobit Saxena, and we will show you Goans.”
Surprisingly, instead of filing a case against the Delhiites, the Calangute police filed a case against the pay parking worker. The Calangute PI on duty, holding charge in the absence of PI Laxi Amonkar, did not even take cognizance minor being assaulted.
Speaking on condition of anonymity, a policeman said that there was pressure from top officers.
The Calangute police even refused to take cognizance of and complaint from the minor’s father of assault on his son, and no medical was done.
Another example was last week there was a case in Mandrem wherein a restaurant on the beach played loud music, and despite complaints by the locals, the Police refused to visit the site.
In fact, in one case of noise pollution, when a constable entered the restaurant to stop the music after complaints, the restaurant owner, obviously a Delhikar, was seen abusing the policemen and questioned: “who gave him permission to enter ” restaurant”.
Not just this, the next day, he parked in the middle of a narrow road so that no vehicle, including Police, could reach his restaurant.
These are just a few cases; the locals now demand that the Delhi businessman are threatening locals at the behest of IPS officers who are district SPs.
“The Chief Minister Dr Pramod Sawant, who holds the Home portfolio, must appoint local officers as North and South SPs instead of the IPS officers, who are mostly from Delhi,” he said.
The locals say that the IPS officer put so much pressure on police inspection and Station in charge to take the Delhi businessman’s side and thereby torture locals.