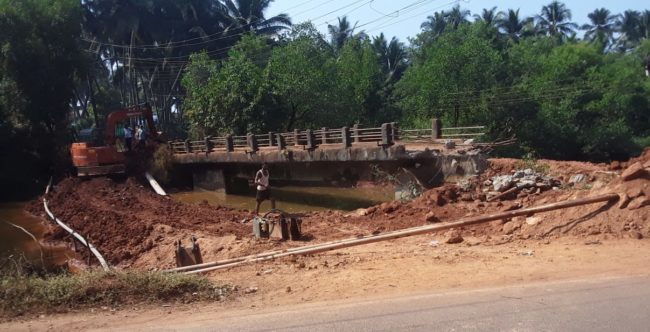 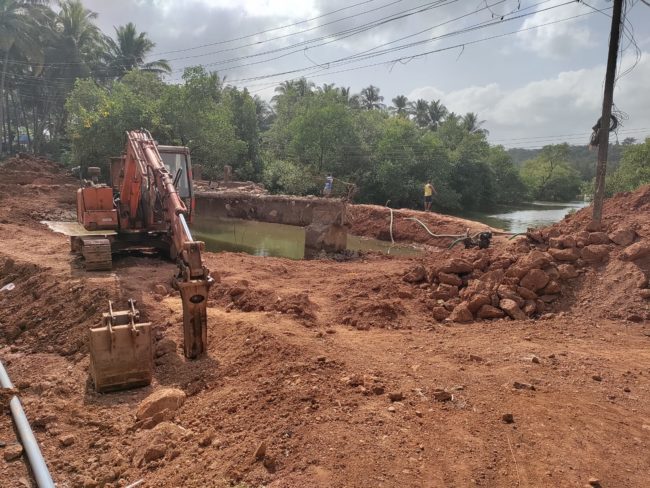 CANACONA: Decades-old footbridge at Agonda known Borim- bridge for its weak structure has been finally taken up for demolition to make way for a new box Culvert bridge on Agonda river.
A JCB is being used clandestinely to break and bring down one of the longest-serving footbridges at Agonda, which many motorists use to cross over on the Agonda river at the village extreme North end.
The bridge, however, provided the shortest route to each Agonda beach at Dhavalkhazan from the village MDRT road towards Khola.
Nilesh Pagi, a social worker, told Goemkarponn, ‘It’s only because of Ex-Canacona MLA Isidore Fernandes that the day is not far to realise the dream of Agonda people for a proper bridge instead of the weak and titled on its own weight on one side.’
‘It’s already two decades now that no MLA or minister could bring the order sanctioned to construct a motorable bridge since the first demand was made 20 years ago. Only assurances were given even by an ex-minister, but only Fernandes had the audacity to promise it during 2017 elections’, and laid the foundation along with Chief minister to pave a way to construct new Bridge,” informed Agonda Sarpanch Badal Naikgaunkar.
Incidentally, the demolition works of the old bridge were delayed as a water pipeline and telephone cable were required to be safely temporarily shifted, which were done after Isidore Fernandes personal intervention; the actual demolition began two days ago.
“Over 75% of the bridge is brought down, and the remaining works will be completed in another two days, which will be immediately followed by laying of footings to erect the Spans on either side”, informed workmen at the site.
A 6- Mtr double-span (Box Cell) Culvert along with approach roads on both sides constructed at the cost of 70.02 Lakhs is expected to be completed in the next 6 months.

Inauguration of burial ground by MMC an eyewash: Khan

Goemkarponn desk PANAJI: In a major setback to the BJP led State government, the Bombay high court at Goa has struck down government decision of ... Read More

Goemkarponn Desk PANAJI: St Cruz MLA Antonio Fernandes has assured to allot shops within the next 2-3 days to vendors whose stalls were demolished outside ... Read More

NEWER POSTALL IN THE FAMILY? RANE v/s RANE in Poriem
OLDER POSTFinally, did Govind realise Sudin is unbeatable in Marcaim?