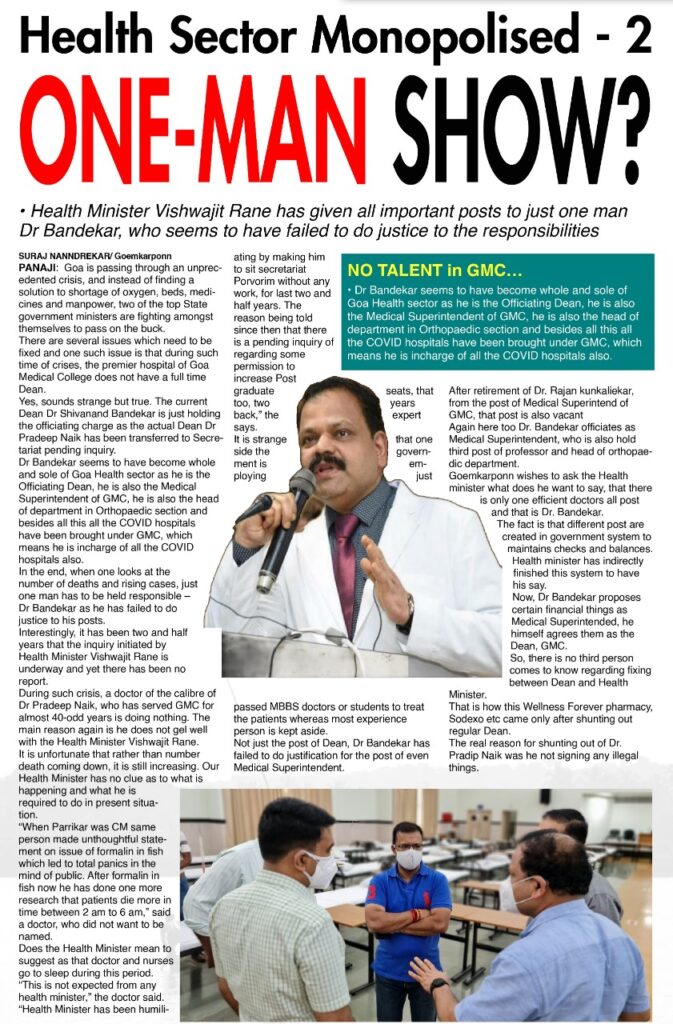 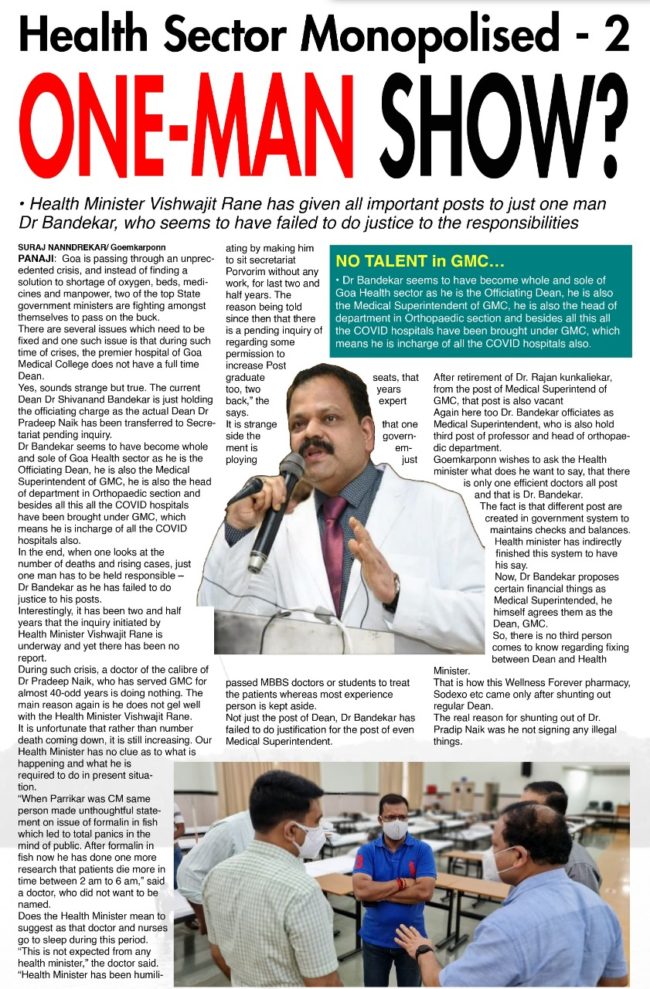 SURAJ NANDREKAR/ Goemakrponn
PANAJI: Health Minister Vishwajit Rane is all annoyed once again as his favourite man Dr Shivanand Bandekar will finally have to quit the post of Dean Goa Medical College if the government accepts the recommendation of the Gopa Public Service Commission (GPSC).
After the incumbent Dean, Dr Pradeep Naik, who was unceremoniously removed as Dean by Rane for failing to toe his line, retired last month, the post has fallen vacant.
Dr Bandekar currently holds the post on an ad-hoc basis for the last two years following the suspension of then Dean Dr Pradeep Naik.
Shockingly Rane wants Bandekar to continue as Dean, who is third in the list, with Dr JP Tiwari being the first and Dr Wiseman Pinto being the second in line.
The Goa Public Service Commission (GPSC) has recommended the head of the Nephrology department, Dr J P Tiwari, for Goa Medical College (GMC) Dean’s post.
A GPSC official admitted that the Commission has recommended the name of Dr JP Tiwari.
“Yes, we have submitted the name of Dr Tiwari as he is seniormost and qualifies for the post,” said an official.
However, he said, the GPSC role is minimal as the proposal comes from teh State government’s Personnel Department.
“The Personnel Dept send us the proposal with the list of candidates with their record. We have to only select the seniormost and the person qualified,” he said.
As per the record, the official said, Dr JP Tiwari, the seniormost, is also a professor with five years of experience.
“Second is Dr Wisemen Pinto, and third is Dr Shivanand Bandekar,” the official said.

Vishwajit wants his man to continue…
It is no secret that Dr Bandekar is the blue-eyed boy of Health Minister Vishewajit Rane.
To get his person to continue in the chair of GMC Dean, Rane is also pressuring the GPSC to change their recommendation.
A source told Goemakrponn, the GPSC has refused to accede to Voshwajit’s demand.
As Dr Bandekar toes the line of Rane, the favourite doctor has been handling four charges simultaneously.
Dr Bandekar is holding charge as Dean, Medical Superintendent GMC, HoD Orthopaedic, and nodal officers for various COVID19 hospitals.
In the end, when one looks at the number of deaths and rising cases, just one man has to be held responsible – Dr Bandekar, as he has failed to do justice to his posts.
Interestingly, for two and half years, the inquiry initiated by Health Minister Vishwajit Rane is underway against Dr Pradeep Naik, yet there has been no report. He was humiliated, Doctors say.
During such a crisis, a doctor of the calibre of Dr Pradeep Naik, who has served GMC for almost 40-odd years, is doing nothing. The main reason again is he does not gel well with Health Minister Vishwajit Rane.
Goemkarponn wishes to ask the Health minister what he wants to say, that there is only one efficient doctor all post, and that is Dr Bandekar.
The fact is that different posts are created in the government system to maintains checks and balances.
The Health Minister has indirectly finished this system to have his say.
Now, Dr Bandekar proposes certain financial things as Medical Superintended; he agrees with them as the Dean, GMC.