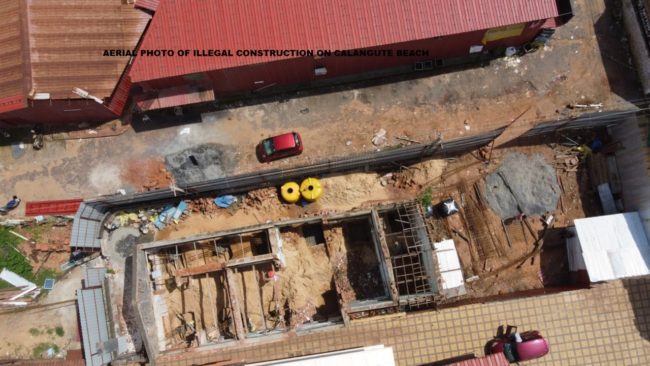 PANAJI: The Goa Against Corruption (GAC) has demanded the immediate demolition by the Calangute Panchayat of an illegal structure on the Calangute beach, which has flouted all Coastal Regulation Zone (CRZ) norms and GCZMA rules.
According to social activist Minakshi Shinde and convenor of the GAC, the Calangute Panchayat had issued a notice for demolition of the structure, dated 22nd March 2021, which was signed by the Calangute VP secretary Raghuvir D. Bagkar, revoking the construction licenses granted earlier in the year 2019 for House No. 5/154 situated in Survey No. 176/16-B on the beachfront.
The construction license was obtained by claiming that an old pre-existent structure needed repairs and renovation due to normal wear and tear.
Shinde said the owners and promoters of the said property being House No. 5/154, situated in Survey No. 176/16-B, flouted every rule in the book and did not keep the 3 meters mandatory offset around the property. Further, they had obtained permission from the Panchayat by making false claims and representation, seeking to renovate and repair an old structure, stating that it was only for personal use but erected a new foundation into the ground.
The original owners sold the property to various different promoters and developers, and the plot of land changed hands more than once, with a Delhi businessman now claiming ownership of the disputed structure.
In spite of several complaints filed against the illegal construction with the GCZMA and the NGPDA, no action was taken for more than 14 months, Shinde explained.
The illegal construction was done from April-May 2020 during the first wave of the Covid pandemic-induced lockdown. However, upon complaints by local residents, the Calangute Panchayat revoked the construction license (granted earlier in 2019) and instructed that the illegal construction be demolished within 15 days.
However, with the second Covid wave in April-May 2021, vested interests and other political powers pushed the matter under the carpet. The promoters of the illegal structure meanwhile approached the Director of Panchayats (DOP) in an appeal against the demolition order of the Calangute Panchayat, but the DOP did not pass any stay order nor did it restrain the Panchayat from going ahead with the demolition, Shinde said.
According to Shinde, the current promoters again applied to the Panchayat with falsified documents and claims, thus managing to clandestinely and fraudulently obtain a NOC (via outward number dated 6th May 2022) for running a restaurant on the illegal premises, which was ordered to be demolished. She also accused the Panchayat secretary, Sarpanch and other members of being hand-in-glove with the promoters and allegedly accepting ‘huge bribes’ to process the NOC.
A ward member who did not want to be quoted alleged that the entire fraud was orchestrated by the former Sarpanch Francis Rodrigues of Madda vaddo, and the present Panchayat secretary and Sarpanch are passing the buck. The Panchayat secretary signed the NOC, which is surprising because such NOCs are only signed by the Sarpanch.
According to Shinde, the Sarpanch, when queried, claimed ignorance of the matter, stating that he had not signed the NOC document. This is passing the buck, everyone’s palms have been greased, and huge money has exchanged hands, Shinde alleged.
If the Panchayat does not act within 15 days, we will move the Bombay High Court at Goa against the Calangute Panchayat, Shinde said.

Summer festival for children from May 16

Goemkarponn desk PANAJI: The Directorate of Art and Culture will hold a “Summer Festival” for the children of the State. It will be organized at ... Read More

No policy, proposal to make mandatory for Industries to employ Goans: Godinho

Goemkarponn desk PORVORIM: Power Minister Mauvin Godinho on Thursday said that there is no policy making it mandatory for industries to employ Goans. Replying to ... Read More