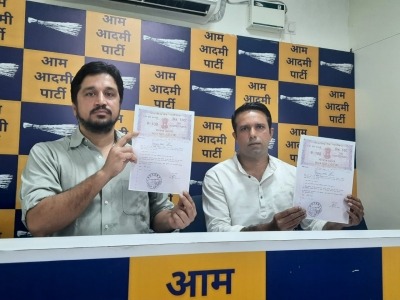 Goemkarponn desk
PANAJI: The Goa unit of the Aam Aadmi Party said on Wednesday that it is the responsibility of Congress to take some serious legal action against the defectors; otherwise people will lose faith in democracy.
To recall, on September 14, former Chief Minister Digambar Kamat, Michael Lobo, Delilah Lobo, Kedar Naik, Sankalp Amonkar, Rajesh Faldesai, Aleixo Sequeira and Rudolf Fernandes had switched to the BJP from the Congress.
AAP Vice-President Valmiki Naik on Wednesday addressed a press conference and criticised Congress for failing to take any significant action against the defectors.
“Because of its pre-election deal with the BJP, Congress is not taking legal action against the defectors. Calangute MLA Michael Lobo and Margao MLA Digamber Kamat are the main persons behind this deal,” Valmiki Naik said.
He said that Congress’ Goa election in-charge P. Chidambaram, desk in-charge Dinesh Gundu Rao and former state Congress President Girish Chodankar were also involved in the deal.
“It is the responsibility of the Congress to take serious legal action against the defectors, otherwise people will lose faith in democracy,” Naik said.
“Nobody has ever seen the affidavits submitted by the Congress candidates prior to the election. On the other hand, AAP had delivered the affidavits door-to-door besides sharing them on social media. AAP has also ensured that the voters can take legal action if an elected member switches sides,” he said.