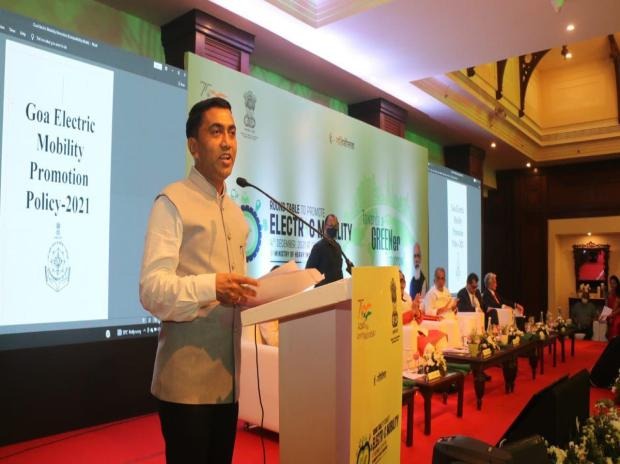 Goemkapronn desk
PANAJI: Chief Minister Pramod Sawant on Saturday launched Goa Electricity Mobility Promotion Policy 2021 here to promote usage of e-vehicles.
He launched the policy at the ‘Round Table To Promote Electric Mobility’ event organised by the Ministry of Heavy Industries.
The policy’s main objective to launch the policy is to promote the use of battery-driven vehicles and create jobs for the state’s people, Sawant said.
Speaking further on the benefits being provided under the policy, he said, “We are giving incentives on manufacturing, waiver of road tax up to five years applicable to all classes of e-vehicles registered in Goa.”
The state government will also provide subsidy to the buyers of e-vehicles, and set up charging infrastructure.
Later speaking to PTI on the sidelines of the event, Sawant said there will be a charging infrastructure on every 25 kilometers on highways. The charging stations will be on shorter distances in the city than the highways.
When asked about the details of the subsidy which would be provided under the policy, he said, “Our policy is for two-, three- and four-wheeler e-vehicles. 30 per cent for two-wheelers, 40 for three-wheelers and up to Rs 3 lakh for four-wheelers.”
The state chief minister said it will be given to around 400 vehicles on a first-come-first-serve basis.The policy will lead to the creation of 10,000 direct and indirect jobs in the state and the demand for e-vehicles will help attract investments in the state.
He launched the policy in the presence of Minister of Heavy Industries Mahendra Nath Pandey, NITI Aayog CEO Amitabh Kant, transport minister of various states and other government and industry officials.