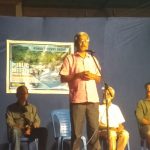 PONDA: Stating that Karnataka has plans to divert all tributaries of Mhadei in Goa, environmentalist Rajendra Kerkar said to save Mhadei, Goa needs to declare Mhadei area as a Tiger reserve which is located bordering Bhimagarh Tiger reserve.
He was speaking at Public Meeting on Tuesday evening organised by the Ponda Citizens Group at Old Bus Stand Ponda.
On the occasion present were Architect K D Sadhale, former Chairperson Shantaram Colvekar and Convenor of Ponda Citizen group Sunil Desai and Uday Dangi were present.
He said, “beside presenting scientific studies in SC, we need to declare Mhadei wildlife as a Tiger reserve. Excluding settlement and agriculture areas, the rest of Mhadei areas should be tiger reserves. Just because we are becoming wealthy, We can’t sacrifice our forest for survival. We need water and oxygen; therefore, Goans need to protect wildlife, forests and hills.”
He said to win the battle, we need to Counter Karnataka’s claim and win the battle by presenting scientific studies.
“The Goa Government failed to use Mhadei Wild Life sanctuary formed in 1999 to use as a shield against diversion effort of Karnataka. While up to Ganjem Usgao, there is salinity with high tide reaching Ganjem. Karnataka plays the wise game by pleading to divert water claiming for drinking water requirement. Under wildlife sanctuaries and tiger reserves, it would be difficult to diver water flows as strict laws prevent diversion of flow where it is tiger habitat,” he said.
He said Goa should effectively use the Wild Life Act 1972 against Karnataka.
He said a detailed discussion on the Mhadei issue should be held in Goa Assembly.
He said in 2002, one official of the Central Water Commission, one day before his retirement, wrongly overestimated the Mhadei water as 188 TMC feet of water and offered 7 tmc feet of water to Karnataka.
“The delegation of the Goa government met the PM and stayed to make a decision. Later Goa asked the Central Government to form Mhadei Tribunal to share Mhadei water, which I had strongly opposed. Later this matter went to Supreme Court, which gave direction to form the Mhadei water Tribunal for sharing water in 2009,” he said.
He said following this, the tribunal was formed in 2013 and gave its decision in 2018 after hundred hearings on the issue.
“It offered Goa 24 TMC feet and 3.9 TMC feet water to Karnataka against which I created awareness as it would create a shortage in water with adverse impact on Goans and its environment following which Government went SC challenging the decision,” he said.
He said due to the diversion, the sweet water ratio would reduce, and the river’s salinity would increase, destroying agriculture, fishing, and the environment.
He said diversion would cause a water deficit, and future generations would struggle for sweet water needs.
“Mhadei river has almost slipped from our hand, and We are awakened after that. We failed to use the formation of Mhadei wildlife sanctuary in 1999 to use against Karnataka and went to tribunal. The tribunal permitted water from only three nullahs, but the fourth nullah Surala also diverted illegally. Karnataka MLAs and MPs had done a lot of studies and spoke while in Goa, our MLAs have no study,” he said.