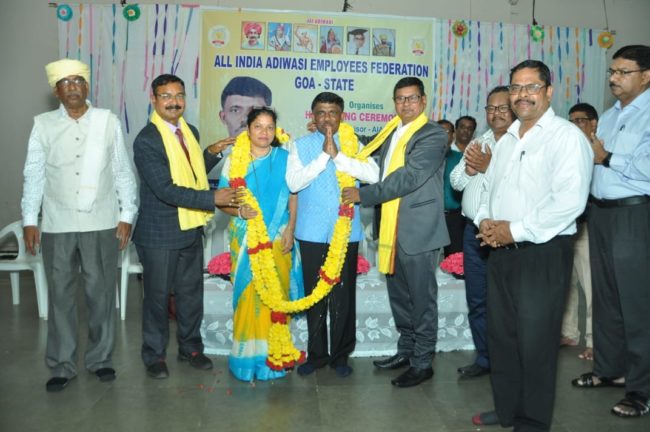 Goemkarponn desk
CANACONA: Goa is the only State to implement 25 various unique schemes for tribal communities, informed Speaker Ramesh Tawadkar.
“As a Speaker, I will not work only for Assembly sessions but also work 365 days to ensure that people of the State don’t face any difficulties. Just a spark is needed to start any good initiative or concept,” he said.
He was speaking after receiving the honour at a ceremony organised by All India Adiwasi Employees Federation (AIAEF), Goa State, at Balram Residential School Amonem, Poinguinim, Canacona. Shri Tawadkar is also the State Advisor of AIAEF.
AIAEF awarded Tawadkar with the status of KRANTIVEER (revolutionary) and declared that henceforth he would be called Krantiveer Ramesh Tawadkar.
Further speaking, Tawadkar said teachers can bring a lot of positive changes in society. He said the challenge of giving employment to unemployed youths will be solved by using manpower in the right direction.
He said he is privileged to be born in the tribal community, as facing many challenges in his childhood made him what he is today.
“The government is continuously working to ensure that tribal people are brought into the mainstream. One cannot get success easily unless one works hard with determination and honesty be any field,” he said.
He further said he is working for the progress and encouraging education among the tribal community through various mediums.
Balram Residential School project is a part of his efforts which is a model school in the State, he said.
“Quality education will be provided to the community through this school, including making available coaching classes to answer competitive exams like NEET and GCET to tribal students,” he said.
Urging the people to preserve the rich culture of the tribal community, he said Lokotsav organised every year at Amonem is a part of efforts to showcase, preserve, and provide a platform to the community’s various cultures. He added that work is underway to provide platform 365 days of the year.
National President, AIAEF, Prof Madhukar Uikey, maintained that Shri Tawadkar gave due importance and inculcated the need for education in life in tribal communities and provided infrastructure and facilities to impart education.
In his address, National Organiser, Principal Dr Chetankumar Masram, urged the people to do something for the Welfare of society.
“Do not support negativity. Always work with positive thoughts. Adiwasi are open-hearted people,” he said.
Tawadkar will take the Adiwasi community to greater heights, he said. Tawadkar has his feet on the grounds even after reaching the post of Speaker, he added.
Dr Madhu Ghodkirekar introduced the guests. Machindra Shirodkar compered. Shri Dipak Karmalkar proposed vote of thanks.
Vice President, Smt Sneha Gaonkar, Shri Ramdas Salelkar; Treasurer, Shri Madhukar Kunkalienkar; Joint Secretary, Smt Ranjana Borkar; Office Secretary, Shri Shrikant Gaonkar; Shri Subhash Kuttikar, Smt Namrata Gaonkar were among the prominent personalities present on the occasion.

Goemkarponn Desk DHARBANDORA: Sugarcane Farmers today said that they were not taken into confidence before handing over land for the National Forensic Sciences University (NFSU) ... Read More

Start working responsibly or step down, Khaunte to CM

Porvorim MLA Rohan Khaunte on Friday said that the mismanagement has hit a shameful new low with the pitiful plea of the Mother and Daughter ... Read More