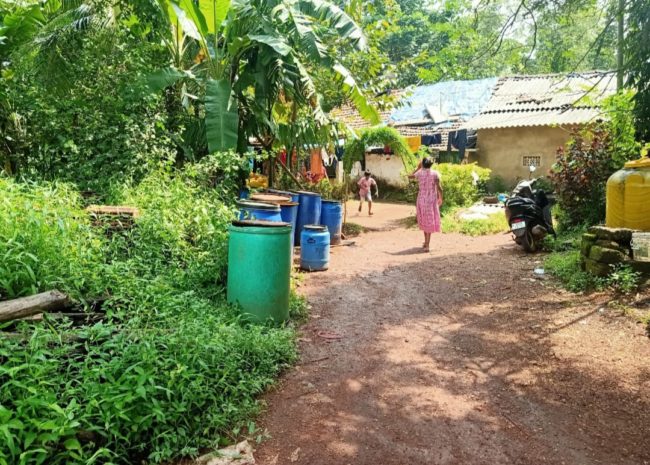 Villages still have no water, power or road connectivity
But Goa govt has splurged over ₹ 300 cr for big programmes instead of developing basic infrastructure in villages

Goemkarponn desk
SANGUEM: Goa will celebrate the 60th LIberation Day on December 19 tomorrow, and the political parties are jostling within themselves to claim credit for Goa’s development.
The Central Government has given a grant of ₹ 300 cr to State for Diamond Jubilee celebrations, but instead of developing infrastructure in villages, it has been splurged on needless programmes.
We recently saw how every MLA in the Goa Legislative Assembly is a crorepati, published in detail by Goemkarponn.
But here is the story we would like to tell our viewers how the villages in Goa are still suffering and begging for basic needs.
Cavrem-Pirla village is such a place in the 60-year-old liberated Goa where the Goans are yet to get liberated from the agony of lack of basic amenities.
The village continues to face unresolved issues of the acute water supply, poor roads, poor network connectivity, unemployment, and underdevelopment. On the one hand, the Goa government is busy cherishing and celebrating the 60 years of its liberation from the colonial forces.
Water is considered an essential factor; the Flora and Fauna, agricultural activities and human habitat mostly depend on the water availability in their area.
But sadly, to their misfortune, one would say, the villagers of Cavrem-Pirla village still have to struggle to get drinking water due to the acute shortage of water in their village.
The water supply situation moves from bad to worse in the summer season, wherein the household women had to literally fetch water from the small water bodies, springs.
A local from the Cavrem named Satyawan Velip said that the villagers have to go to Quepem for their administrative and official work, but the village is located in the Sanguem taluka.
The water scarcity in his village is round the year and not only during the summer season. Although we are from Sanguem taluka, we don’t get water supply from Selaulim dam, which otherwise supplies water to most of South Goa. 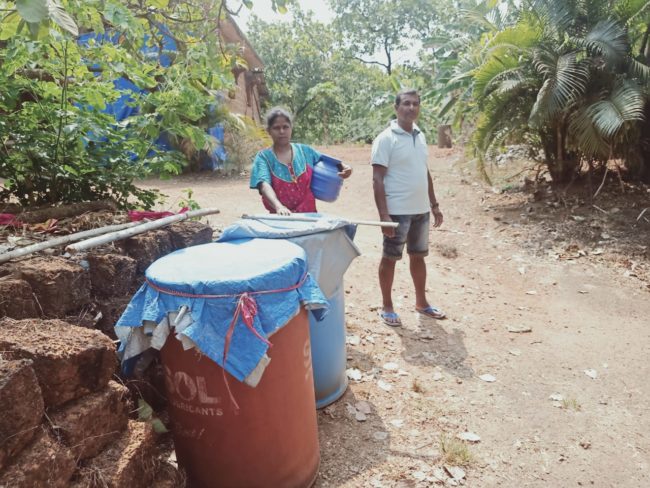 Another local, Abhay Gaokar, informed that the tap water which the village gets is from the Kishavat river. Villagers also store that water. Otherwise, the villagers mostly remain dependent on natural water sources such as borewells, natural springs, wells, etc.
A villager Sapana Velip has also blamed the state government for its failure to bring basic amenities such as drinking water in the remote village of Cavrem Pirla. she said that many leaders came and went, but nobody was able to resolve and give concrete solutions to the villagers in the matter of water supply.
Velip further said that we here in Cavrem-Pirla are fighting for the water in the world of development and advancement.
“We, women, have to go to almost far places to wash our clothes. We have to go 2 km to get water during the summer seasons. A water tanker comes once in two days, and then people have to stand in a queue to fill water containers.
Efforts were made telephonically to contact the Sarpanch of Caverm-Pirla panchayat, but he was unavailable.
When contacted, the panchayat secretary agreed that the major matter of concern in the village is a scarcity of water during March, April and May. Local people mostly depend on natural resources. He further said villagers are dependent on the “Ubee Fatter” where people mostly fetch spring water, which is located in a hilly area of the village.

Cudeghal village from the BJP’s PWD minister Deepak Pauskar’s Sanvordem constituency is far from the Prime Minister’s dream of sabka sath, sabka vikas. The Cudeghal locals cry as they are deprived of basic amenities ranging from bad roads, acute water shortage, lack of toilet facilities, poor cellular connectivity and so on and so forth.
It may sound pleasant to hear the glorifying tales your local MLA must be telling the voters about how hard the government is trying to improve the living standard of the people.
The villagers of Cudheghal will have a different story to tell on the 60th liberation day of Goa. There are no proper roads, water, toilets, and connectivity, but these villagers are blessed with voting rights because they are considered human beings. The villagers are repeatedly asking how they should live in such inhuman conditions where they have a BJP ruling minister of PWD who has failed these people in giving them basic amenities.
The villagers say that for the last 60 years, the panchayat, MLAs, and the higher authorities have totally neglected in resolving this village from the Sanvordem constituency leaving this village deprived of the promised achhe din.
Cudeghal village is in a forest area and has around 60 people and around 25 houses. The village is dependent on mining, but in the current situation, the closure of the mining business has had a huge impact on the village; at present most of the villagers are unemployed and when the mining business was going on, the village had few facilities.
The local panchayat has failed to address the grievances of the villagers after the closure of the mining business. The villagers reacted by saying that the mining business was closed and the village was under a dark cloud.
The villagers also say that for the last several years, they have been taking up the issue with the mining company as well as the local administration. Still, they do not consider it their duty to give any basic rights to the village, but during election time, politicians give ensures and hopes, But after the election, the situation is the same as before.
Shalaka Naik, a local woman, said that they worried about the women’s safety and said that my daughter is in 10th standard.
She uses the way for a school where both sides of the road are covered with jungle areas. Also, people have to suffer a lot due to lack of road .”It is very difficult to get cellular connectivity for children to study so they come on the road or in the mountains, so there is no basic facility in the village,” said Shalaka Naik, and further she added the most important problem women faces is lack of toilet facility.
There are no toilets provided by local Sanvordem panchayats or MLA’s of the constituency in the last many years as mining companies and panchayats show their finger towards each other, Shalka said.
Local Rajendra Shirodkar said, “Leave the basic facilities. The people of this village do not have toilet facilities. As there is no such facility, the villagers are forced to use open toilets. The water facility is provided by tankers twice a week.”
Since the road is not paved, the villagers still use the Kacha road for transportation.

Only 0.6 cured people have donated plasma in Goa

Only 0.6 p.c of the COVID19 recovered patient have donated their plasma in the State where several people are losing their lives on a daily ... Read More

No decision on reopening schools yet: CM

Goemkarponn Desk PANAJI: Chief Minister Pramod Sawant has said that the state government has not decided to reopen schools in the state. “At present, have ... Read More