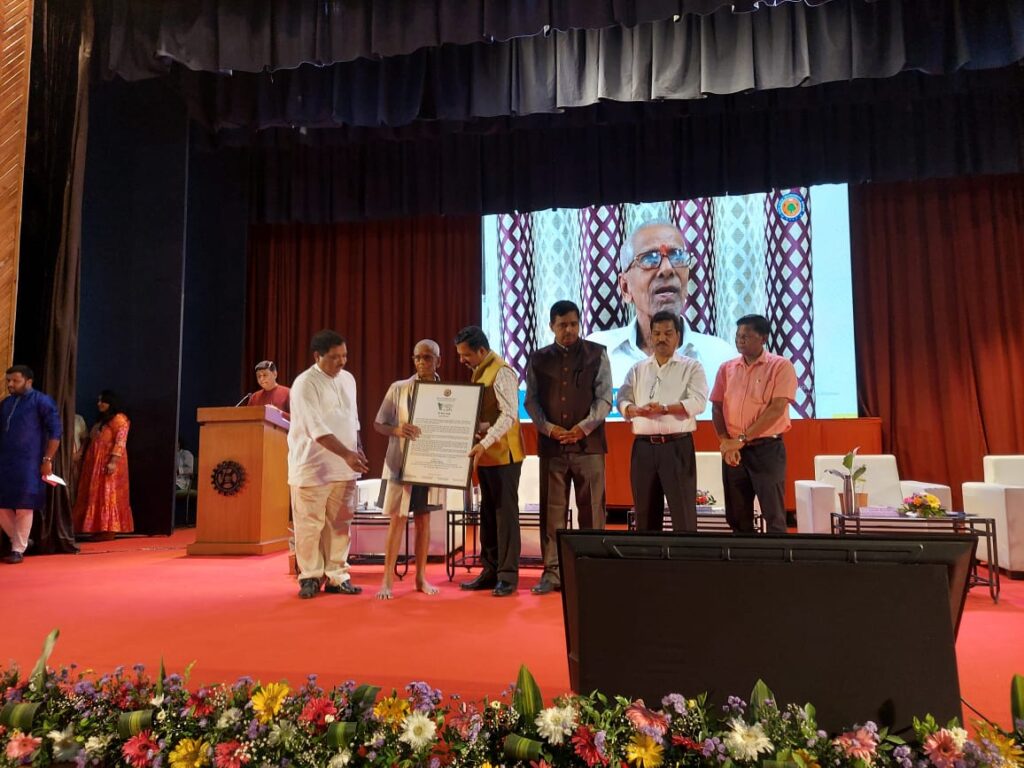 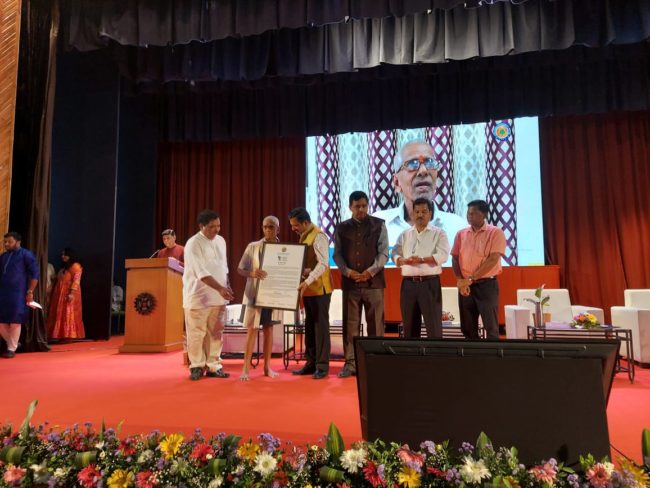 CANACONA – Himself orphaned at the tender age of 8, Kanta Gayak, popularly known as ‘Kantmam’, now 80, has not only built his life but became a popular figure healing people from snake-bites and other ailments with his ayurvedic expertise.
‘Kantmam’, of Shrishthal in Canacona, was recently honoured with a Bio-diversity Conservation Award by State Bio-diversity Goa State Bio-Diversity Board(GSBB) in a program held at Dona Paula auditorium on the occasion of World Environment Day.
After Kanta lost his parents at a very early age, for a very short period, he and his brother were taken care of by his grandfather but were again orphaned as soon as the grandfather too passed away, but not before the grandfather (who happened to be an Ayurveda practitioner of that period) passed on his legacy of treating people with medicinal herbs.
Though Kantmam had a very low education of that time, studying up to 4th Std, he has very tactfully and effectively inherited all the prowess of treating needy people from his grandfather and learnt even further, especially the saga of saving people bitten by poisonous snakes.
By strictly following all the restrictions, rules and regulations, Kantmam has virtually mastered the skill not only of prescribing herbs and ayurvedic medicines to the needy but soon the favourite ‘Zadpaleacho Dotor’ to provide protection (Mantravop) from snake attacks such as a smitten/hurt Cobra.
His all-around service for the well-being and safety of the people became famous, that not only from Goa but people from neighbouring Karwar and other parts began to visit him, many times waking him up even at odd and unearthly hours.
While Kantmam is known never to charge any fees for his services, the beneficiaries, however, used to often reward him with a Coconut and Rice (Nall-Podd) after availing his services. He is known to provide herbal and Ayurvedic treatments for various ailments right from newborn, adolescent boys and girls, women problems, Jaundice, acidity, and fatigue, amongst different other health issues, besides effectively treating Sorpi, Chickenpox, Mums, by merely applying medicinal herbs and prescribing ayurvedic procedures.
Kantmam, now @ 80, keeps himself hale and hearty inspite of having a disciple and strenuous daily routine. He runs a small tea stall with his devoted wife’s contribution helps him to maintain his substinence. After hard days works at his tea hotel, he retires for the night early in the night, but as his staunch regular routine, Kantmam is known to wake up as early as 4 in the morning, and after his regular chorus performs Yoga, cleans his hotel and irrespective of the season and temperatures, he takes a bath only with Cold Water. Before he actually begins in his daily chorus, he performs Devpuja, Namsmaran and Mantrochchhar Pathan strictly to carry on his mission (being an Ayurvedic Practitioner). According to Kantmam, a very strict practise of rituals has to be compulsorily followed by the one who treats Snake-bites. Accuracy and Morality with strict adherence to good manners of the Practitioner are very necessary and important, Kantmam says. According to Kantmam, a snake bite victim has to strictly avoid savouring any of the vegetables like Bottlegourd, Ashwgourd and Snake gourd. Kantmam is known to maintain an Ayurvedic medicine cabinet which he uses for the people visiting him.
Kantmam family consists of his wife, two sons and two daughters, all married, two daughters-in-law and two sons-in-law and five grandchildren. One of his Son is a music teacher, while another son is running a restaurant nearby.
Interestingly, while one of his sons is reportedly inclined towards taking the family tradition alive, but realising his son’s non-seriousness to keep the family’s Ayurvedic Healers tag, Kantmam has reportedly trained two persons from his locality. However, though both are known to be gaining knowledge through him, the strict adherence to certain abstinence and regulations is not coming easily to the duo.
Thanking GSBB for recognising Kantmam in Biodiversity Conservation, Shrishthal Biodiversity Management Committee (BMC) president Vinay Tubki informed BMC had long back issued Vaidus-Card, (an identity to allow the cardholder to visit forests and collect the herbs and medicinal plants, etc.). ‘ We have seen how selflessly Kantmam is servicing the society; he never asks for fees but simply goes on to treat people without expectations. Such people are a God’s gift to the society