MARINA RETURNS?? The Marina project is likely to return to haunt the coastal communities of Goa. 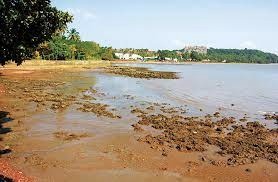 Goemkarponn desk
VASCO: Nauxim Marina project likely to return to haunt coastal communities of Goa. This project was mentioned in the agenda of the Environment Assessment Committee meeting in Delhi on March 10.
It looks like the Nauxim Marina project, which the Goans feel has been shelved, on the contrary, is very much alive and kicking. In fact, while Goans were focused and busy on the election results on March 10, the Expert Appraisal Committee (EAC) of the MoEF&CC might have considered the grant of TOR (Terms of Reference) for the project at its scheduled meeting in New Delhi.
The enactment and enforcement of the Major Port Authorities Act 2021 appears to be the catalyst for the revival of the project; the project description uses the term “in Mormugao Port Trust waters” (Proposed development of AHOY Marina in Mormugao Port Trust Waters, Goa by M/s Kargwal Constructions Pvt. Ltd.)”. Isn’t it a shocking and major cause of concern for the coastal communities, especially the fishermen communities of Nauxim, Cacra and nearby areas?
The long-pending project, which is being pushed time and again to make it a reality by the project proponents, has once again come into the light and this time with the addition to its description ” in Mormugao Port Trust water”.
A local fishermen Krishna from Nauxim stated that the coastal area, which is habituated by the coastal communities, had opposed this Marina project in the Nauxim area way back in 2010.
“Once again during the Parrikar led BJP govt in 2015 too, locals were against this Marina project, the fate of this Marina project in the year 2019 was also the same wherein coastal communities especially the fishermen communities from Goa came together and had an agitation to oppose this Marina project highlighting that the project will do more harm than the good to the local communities and the area,” he said.
A letter written by the project proponent to the Member Secretary of Expert Appraisal Committee (EAC) of Ministry of Environment, Forest and Climate Change, stated “We have entered upon a concession agreement with Mormugaon Port Trust (MPT) to establish a Marina to facilitate small boats & yachts parking which will enhance the value of tourism of Goa.
“As the proposed Marina is a port facility within Mormugaon port trust waters, it requires obtaining the CRZ clearance from MoEFCC as per CRZ notification 2011. In this regard, we are submitting herewith application for CRZ clearance along with Form 1, Prefeasibility report, Executive summary and relevant maps,” the letter reads.
Further, it says, “We request you (EAC) to consider our proposal in the upcoming EAC meeting for grant of TOR for carrying out the ElA study.”
Subsequently, during the EAC meeting, which took place in Delhi on March 10, 2022, agenda number 3.5, “Proposed development of AHOY Marina in Mormugao Port Trust Waters, Goa by M/s Kargwal Constructions Pvt. Ltd. – Terms of Reference Proposal No. IA/GA/NCP/257252/2022 and File No 10-38/2016-IA.III” has been mentioned.”
This shows that the people’s opinion has been sidelined totally, and there is more eagerness to push this project on the Goans when they are openly against such a project.
When contacted, Ramrao Wagh, who has been spearheading this issue, said that people have been against the Marina project since the beginning said that many fisherman communities had opposed the Nauxim Marina project several times.
“There was people’s agitation on this issue,” he said.
Wagh further added that some fishermen also met Chief minister Dr Pramod Sawant on this issue and had clearly disclosed their dismay over the Marina project.
“Chief Minister Dr Pramod Sawant had also assured that if people do not want Marina project, it will not happen, so what happened to that promise now?” He questioned. The voices and opinions of the people are being sidelined.
“We have also opposed the Major Port Authority bill in the past, which won’t benefit the locals. Similarly, the Marina project will negatively impact the coastal communities and fisherman community and their traditional occupations,” he added.