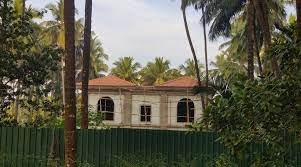 PANAJI: The directorate of Panchayat has directed BDO Tiswadi to conduct a site inspection of the alleged illegal bungalow located in the UNESCO protected heritage site at Old Goa.
“The Block Development Officer, Tiswadi is hereby directed to conduct site inspection as alleged by the complainant and during site inspection, if any irregularities are/are notice than to submit a report under Section 66(5) of the Goa Panchayat Raj Act, 1994 to Director of Panchayats, Panaji Goa for taking further necessary action in the matter,” states the order.
The Vigilance Officer-il, Directorate of Vigilance, has forwarded two copies of complaints dated 06/12/2021 of Adv. Amit Palekar & Associates, AF, B-4, 1st Floor, Casa Immaculada New Progress High School, Panaji Goa on the seif explanatory subject.
The village panchayat of Se Old Goa had already issued a demolition order to the owner of the controversial illegal bungalow located in the UNESCO heritage zone.
The village panchayat had earlier resolved to direct the owner of the Bungalow, Sumermal Jain of Corvus Urban Infrastructures LLP and Kranti Sadan, Kamathipura, Mumbai, to demolish the structure, at their own cost, within 15 days failing which the process would be initiated through the Deputy Collector.
The show-cause notice issued, as per resolution number 4 (1) dated January 20, 2022, was served to the owner of the controversial Bungalow on January 24 by the village panchayat secretary Ashish Naik after conducting a site inspection on January 13, 2022, and recording the panchanama in the presence of the representative of the bungalow owner and others.