Power Supply restored to entire Canacona in less than 24 hours 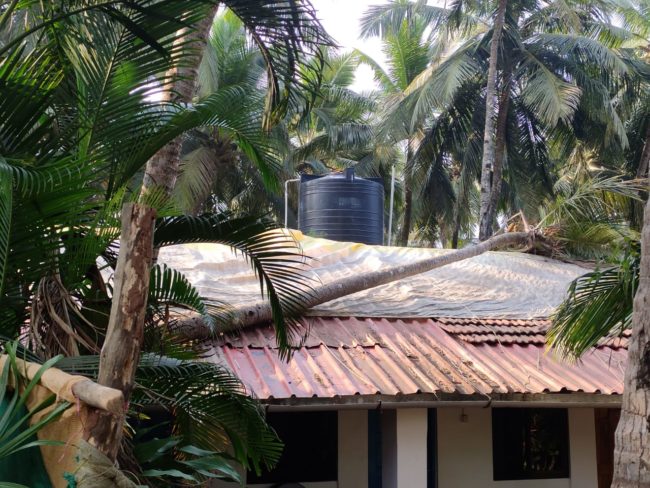 By 6.30 pm on Tuesday, Canacona electricity staff were right on their feet from the time gutsy winds forced a blackout in several parts of Canacona (post 9pm Monday night), successfully raised up the last bastion at Ourem, one of the major affected locality and restored Power Supply.
“At many of the places, the restoration works were taken up early in the Tuesday morning itself, which helped restoration by the end of the day due to hard and appreciable works out forth by the people”, remarked a resident from Palolem.
Besides other works, a total of 8 electric Poles were replaced, several restorations of snappings at different Conductors, pulling of Wires were carried out non-stop by the department on a war footing manner.
The wire-snappings and Pole breakages took place mostly in Palolem, Ourem, Patnem, Colomb cand Gulem areas plummeting these areas into darkness after the gusty winds brought down several trees, including coconut trees on the Electricity alignment.
“Nearly 125 electricity line staff, many of whom were off for the periods, were recalled for duties, and we all worked throughout the day restoring the power in all the affected areas”, informed Canacona Assistant Engineer (Electricity) Anup Rane.
Rane also informed the department was supported by two teams from two different contractors who were instrumental in a successful restoration in a record time.
Rane informed the losses could be anything beyond 10 lakhs of rupees, but the department has successfully achieved the challenge to totally restore the supply on the first day itself.
Incidentally, Electricity department officials were also extended support and cooperation by a congress and Goa Forward team. Decrying staff shortage with the department, congress GS Janardan Bhandari, Goa Forward leader Vikas Bhagat and their team visited Electricity AE and, after understanding the requirements, also approached higher officers for immediate response to necessities of Canacona sub-section to restore the power supply at the earliest possible.’
Canacona Electricity Assistant Engineer (Electricity) Sanjay Naik, besides the Junior Engineers and Supervisors, were all on their feet until the power supply was finally restored, bringing a big relief to the residents and the tourists at Palolem and other affected areas.
Bhandari and Bhagat, besides several residents, particularly of Canacona municipality, appreciated and thanked the electricity officers and officials for their commitment in their duties to restoring the power supply in record time.-

Leader of Opposition Digambar Kamat on Tuesday asked whether BJP will produce minutes of All Party meeting with signatures of Opposition MLA's substantiating their claim ... Read More